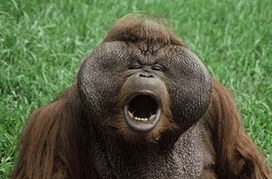 “The importance of social bond in shaping yawn contagion demonstrates that empathy plays a leading role in the modulation of this phenomenon,”

Contagious yawning is also seen in monkeys and great apes. Indeed, this new study replicates similar findings with chimps, where the yawn contagion is greater between group members, and findings with baboons, for whom yawns are more often caught from intimate yawners (where intimacy is discerned from rates of mutual grooming). “When considered together,” the researchers concluded, “these results suggest that the relationship between yawn contagion and empathy may have developed earlier than the last common ancestor between monkeys, humans and non-human apes.”

Ann Allegre, MD, director of medical programs for Kansas City Hospice and Palliative Care, since 1999, chronicles her personal story as a young physician and survivor of serious illness, culminating in her renowned work in palliative care and hospice.S…

Despite this speech, fostering empathy is not a visible priority in either the school curriculum or whatever remnants of civic dialogue are present in the United States. In fact, empathy is poorly defined, poorly understood, and rarely taught. What is …

We will discuss self-transformation and the ability to understand the self through engaged learning and intentional travel.Although we share our experiences studying abroad in both Rwanda and Serbia/Bosnia/Kosovo, we argue that in essence, it does not …