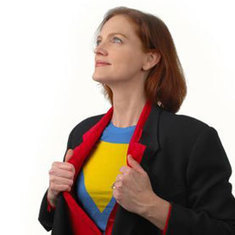 There seems to be a simple way to instantly increase a person’s level of general knowledge. Psychologists Ulrich Weger and Stephen Loughnan recently asked two groups of people to answer questions. People in one group were told that before each question, the answer would be briefly flashed on their screens — too quickly to consciously perceive, but slow enough for their unconscious to take it in. The other group was told that the flashes simply signaled the next question. In fact, for both groups, a random string of letters, not the answers, was flashed. But, remarkably, the people who thought the answers were flashed did better on the test. Expecting to know the answers made people more likely to get the answers right.

Can our thoughts improve our vision? We tend to believe that an essentially mechanical process determines how well we see. Recent research by Ellen Langer and colleagues suggests otherwise. It is a common belief that fighter pilots have very good vision. The researchers put people in the mindset of an Air Force pilot by bringing them into a flight simulator. The simulator consisted of an actual cockpit including flight instruments. The cockpit was mounted on hydraulic lifts that mimic aircraft movement and performance. People were given green army fatigues; they sat in the pilot’s seat, and performed simple flight maneuvers. They took a vision test while “flying” the simulator. A control group took the same vision test in the cockpit while the simulator was inactive. People’s vision improved only if they were in the working simulator.

To rule out the possible effect of motivation, the researchers brought another group of people into the cockpit and asked them to read a brief essay on motivation. After people finished reading, they were strongly urged to be as motivated as possible and try hard to perform well in the vision test. The test was conducted while the simulator was inactive. They did not show a significant improvement.

In an eye exam, we are used to start experiencing problems at the bottom third of the eye chart, where letters start to get small. In another experiment, Ellen Langer and colleagues showed people a shifted chart. At the top, it included letters equivalent to the medium-size letters on the normal eye chart and the chart progressed to letters of very small size at the bottom. Because people were expecting to read the top two thirds of the shifted chart as well, they were able to read much smaller letters.

We also tend to think that our bodies respond to physical exercise in a mechanical way. We count our calorie intake, the calories we lose on a treadmill, etc. However, merely changing our thoughts about our physical activity seems capable of changing our bodies. Hotel room attendants clean on average 15 rooms per day, each room taking between 20 and 30 minutes to complete. (The physical activity involved meets the Surgeon General’s recommendation of at least 30 minutes of physical exercise per day for a healthy lifestyle.) However, most hotel room attendants believe that they do not get regular exercise; and a lot of them believe that they do not get any exercise at all. Alia Crum and Ellen Langer told hotel room attendants that their work provided the recommended exercise for a healthy lifestyle. This treatment group was monitored for 4 weeks. A control group of hotel room attendants, who were not told that their work provided the recommended exercise, was similarly monitored. People in the treatment group lost weight; their body fat percentages, waist-to-hip ratios, and systolic blood pressures dropped. People in the control group showed no such improvement. These changes occurred despite the fact that the hotel room attendants’ amount of work, amount of exercise outside of work, and diets stayed the same.

Recent research on placebos gives us clues about the mechanisms by which our mental activity causes these effects. In a conceptual replication of earlier work, Antonella Pollo and colleagues asked people to lift a certain amount of weight before and after drinking caffeine at high doses. The liquid in fact contained no caffeine, but the weight was secretly reduced after people drank it. That way, people learned to associate the liquid with less fatigue. Later, when people lifted the original weight after drinking the liquid, they experienced less fatigue. It seems that a central neural governor of fatigue suppressed the fatigue response. Marion Goebel and colleaguesgave allergic patients allergy medication after a novel-tasting liquid. Later, drinking the liquid with fake medication suppressed the immune system and allergic skin reactions. Fabrizio Benedetti and colleagues first increased people’s growth hormone levels by injecting medication. Later, injecting a saline solution (salt andwater) presented as medication resulted in similar increases in hormone levels. Predrag Petrovic and colleagues suppressed people’s emotional reactions to unpleasant pictures by injecting antianxiety medication. Later, injecting a saline solution presented as medication resulted in reduced activation in brain areas associated with anxiety.

Expectancies, such as expecting that one’s work will bring about health benefits, are capable of producing physiological outcomes. Learned associations, such as the association between being an Air Force pilot and having good vision, can alter other cognitive processes, such as visual perception. Meanwhile, placebo effects observed in clinical research work via expectancies and learned associations created by fake operations, sham drugs, etc. Such expectancies and learned associations have been shown to change the chemistry and circuitry of the brain. These changes may result in such physiological and cognitive outcomes as less fatigue, less immune system reaction, elevated hormone levels, and less anxiety. The interventions that resulted in better performance in a knowledge test or better vision are placebos outside of the clinical context. However, the chemical and neural mechanisms by which they operate are probably similar.

These are likely manifestations of an adaptation that helped us survive throughout our evolutionary history by helping us prepare for the future. For example, when subtle cues in an environment trigger thoughts about a predator, that in turn triggers physiological changes that prepare the body for the impending confrontation even before the predator comes into sight.

As this line of research advances, we will likely discover new ways of taking control of our mindsets. Weger and Loughnan, the researchers who improved people’s knowledge test results with a bogus prime, wrote, “People have significant psychological resources to improve their well-being and performance, but these resources often go unused and could be better harnessed.” The mind and body are not separate; our thoughts have remarkable control over our bodies; and our mindsets are capable of improving our brains’ performance.

“The best moments in our lives are not the passive, receptive, relaxing times… The best moments usually occur if a person’s body or mind is stretched to its limits in a voluntary effort to accomplish something difficult and worthwhi…

Empathy is a complicated emotion, even for mice. On seeing another in pain, a mouse will act as if it itself is also hurting—much more, though, if it knows the first mouse. Capuchin monkeys will help out another monkey, without any reward, but only i…