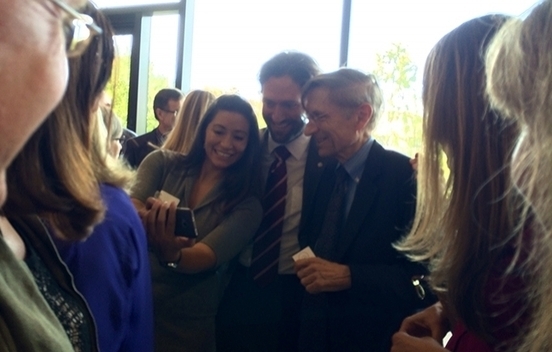 The David and Lucile Packard Foundation and Ashoka Changemakers have announced the six winners of Building Vibrant Communities: Activating Empathy to Create Change! The challenge sought local initiatives that tap the power of empathy to strengthen communities and equip young people to become leaders of change.  The competition received more than 200 entries from Northern California community organizations.

The winners were announced at the Packard Foundation’s 50th Anniversary Open House, during which winners and challenge finalists had the opportunity to share their ideas with local community members in attendance.

“So much exciting work to foster empathy is happening in our five-county region and neighboring communities,” said Carol Larson, President and CEO of the David and Lucile Packard Foundation.  “We are particularly encouraged by the six winning organizations which are actively cultivating empathy skills. It is their hope and ours that local communities will be strong and vibrant places where future generations can reach their full potential as community builders and problem solvers.”

Empathy is a crucial skill for creating social change,” said Bill Drayton, CEO and Founder of Ashoka. “By activating empathy in their communities, the winners of the challenge are paving the way for a world where everyone can become a changemaker and tackle the issues that matter to them most.”

Active ListeningSee it on Scoop.it, via Empathy and Compassion

The second principle in the SERVANT Leadership acronym is Empathetic. In order to lead people, you need to know what it feels like to walk a mile in their shoes.Even if you’ve never been in their position, you must have the empathy to p…

Empathy is a relatively new word, only having come about in the 20th century. While most social work classes discuss empathy to some extent, few schools have incorporated the latest research into the curriculum. But Gerdes believes they soon will, bec…

By now, it’s a well-worn argument: The far-reaching grasp of technology has basically taken our attention spans hostage.But what’s more frightening is that it’s eroding our ability to empathize, argues Michele Borba in her new book &l…