Home » News » Why is a yawn contagious? Study tries to find out 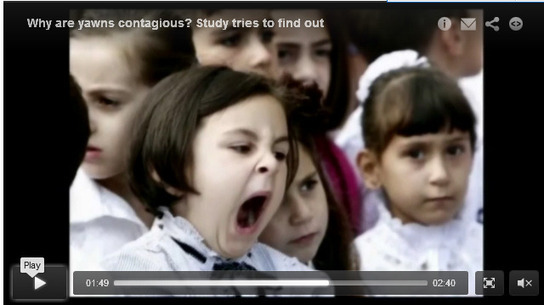 The scientists, from the Museum of Natural History and Territory in Calvi, outside Pisa, believe that yawn infectiveness can be a form of emotional contagion. They believe that humans, and other primates, transmit yawns more often and more quickly from family and friends than acquaintances and strangers.

contagious yawning may ultimately prove a useful tool in the field of mental health, according to Norscia, saying it could be used as a non-invasive method to help assess empathy disorders.

Social apathy may arise from deficient connections among emotional brain centers When most of us imagine someone in pain, we feel uncomfortable and want to help. Psychopaths do not: a callousness toward others’ suffering is the central featu…

Do you frequently experience the intense emotions of other, particularly in public settings? Do you find that at times these feelings are intrusive?Do you struggle with trying to push these emotions away, causing you to become drained and depleted?Are …

I propose a tripartite model of empathy, roughly corresponding to Freud’s postulated id, ego, and superego. In this model, normal empathy is comprised of three components: instinctual, emotional, and cognitive. Children develop empathy in three p…

Empathy understands people’s emotions in two modes, automatic and deliberate.I recently attended a research conference in Toronto sponsored by Roots of Empathy, an organization dedicated to increasing empathy in schools. The method that they…