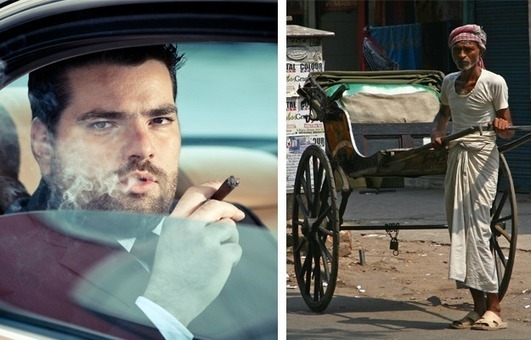 After 30 years of greed being good and rising tides lifting all boats, inequality — or “class warfare,” if you prefer — is back on the political agenda.

The Occupiers who camped out in central squares from Melbourne to Oakland, denouncing the “1 percent” for its supposedly ill-gotten gains, have a point: Inequality is out of control. But these mainly middle-class complainers are an incredibly coddled bunch by any international reckoning. This is good news, because we’re going to need to tax them more if we’re ever going to solve the world’s real inequality problem: the estimated 900 million people who live on less than $1.25 a day.

First things first: America’s rich are really, really rich. U.S. Census data suggest every man, woman, and child in the top 1 percent of U.S. households gets about $1,500 to live on each day, every day. By contrast, the average U.S. household is scraping by on around $55 per person per day. But the global average is about a fifth of that.

So by global standards, America’s middle class is also really, really rich. To make it into the richest 1 percent globally, all you need is an income of around $34,000, according to World Bank economist Branko Milanovic. The average family in the United States has more than three times the income of those living in poverty in America, and nearly 50 times that of the world’s poorest. Many of America’s 99 percenters, and the West’s, are really 1 percenters on a global level.

Nor did the Western 99 percent “earn” most of their wealth, any more than the top 1 percent “earned” theirs. It’s the luck of where you’re born, according to the late Nobel Prize-winning economist Herbert Simon, who estimated that the benefits of living in a well-functioning economy probably account for 90 percent of individual income. “On moral grounds,” he wrote, “we could argue for a flat income tax of 90 percent to return that wealth to its real owners” — i.e., everyone else in the country. That radical suggestion makes the Occupy Wall Street crowd look like a bunch of free-market libertarians.

Western middle classes actually get back a good deal more from government than they pay in. Political scientists Vincent Mahler, David Jesuit, and Piotr Paradowski examined the benefits — from pensions to child welfare payments — that taxpayers, rich and poor, in 12 European countries and the United States received. They found that the middle 60 percent of the population had a larger income share after taxes and transfers than before. Thanks to the good folks at the Internal Revenue Service, the broad slice of the U.S. middle class gets 3 percent more of the income pie after taxes and transfers. And that doesn’t account for a range of state subsidies for public goods like colleges and universities that disproportionately benefit the middle classes.

Billionaire investor and philanthropist Warren Buffett thinks he has a plan to right the ship: tax people making $1 million a year at 30 percent and those making $10 million at 35 percent. But that’s not going to cut it. A 30 percent income tax for 2008’s top 1 percent would have raked in $281 billion for the U.S. government — still not enough to plug the $400 billion-plus deficit that year. Plus, taxing the West’s obscenely rich to help a Western middle class that is merely very rich doesn’t seem like the highest of priorities, frankly. We need to deal with inequality all the way down to the bottom of the income pyramid, for everyone’s sake…

…It is high time for the richest 1 percent to help the rest catch up. But don’t fool yourself — if you live in the West, you probably are that 1 percent.

The Occupy movement has been in the news a lot the last few days. The latest developments include the evictions of protesters around the country, even in New York and Oakland where it was strongest.   My own exposure to the protests came when my l…

Our brains are wired to confuse the real and the symbolic. And the implications can be as serious as war and peace.Jim Manske’s insight:A long read…I enjoyed the ride! ;)See it on Scoop.it, via Radical Compassion

Get ready to have your mind blown. I was seriously shocked at some of these mistakes in thinking that I subconsciously make all the time. Obviously, none of them are huge, life-threatening mistakes, but they are really surprising and avoiding…