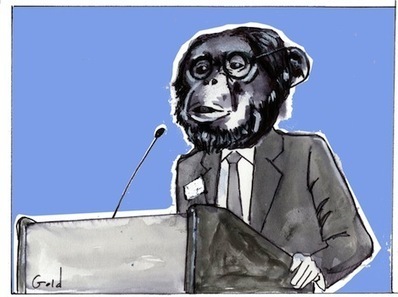 In the struggle for existence how do we herald the better angels of our nature?

Author’s Note: On Tuesday I will be traveling to Manchester, England for the International Conference for the History of Science, Technology and Medicine where I’ll be giving my talk entitled “A Historical Epistemology of Empathy from Darwin to De Waal.” In the lead up to my journey across the pond the iCHSTM organizers offered me the opportunity to publish a shortened version of my talk on the conference blog where I will be cross-posting what follows.

A historical epistemology of empathy from Darwin to de Waal: primates and perspective-taking after World War II

Much overlooked in Darwin’s theory of natural selection is his argument for the origin of social instincts that gave rise to shared common feelings between animals in a group. For Darwin, the “moral sense” had its foundations in the pleasure an animal felt from their social community and their identification with the internal state of others, or perspective-taking. From this followed the emergent instinct to “perform various services for them,” a trait that was promoted through natural selection when groups with a high level of reciprocation “would flourish best and rear the greatest number of offspring.”

This concept subsequently formed the basis for Peter Kropotkin’s 1902 work Mutual Aid: A Factor of Evolution, first appearing as a series of articles in The Nineteenth Century beginning in 1890, and culminating in his posthumous work Ethics: Origin and Development in 1924.

Tal-Chen Rabinowitch is working in Cambridge towards a PhD. Her research explores the social nature of musical group interaction in children and the ways in which it can be directed towards the long-term enhancement of emotional empathy. This work…

empathy…see it from their perspective– lead-in for classroom guidanceSee it on Scoop.it, via Empathy and Compassion

Narcissistic personality disorder (NPD) is associated with an assortment of characteristics that undermine interpersonal functioning. A lack of empathy is often cited as the primary distinguishing feature of NPD.However, clinical presentations of …

A Georgetown Day School teacher talks about her favorite activities for keeping the empathy muscles strongHow do you build empathy and other changemaker skills (leadership, teamwork, problem-solving) in your students?====================There are sever…