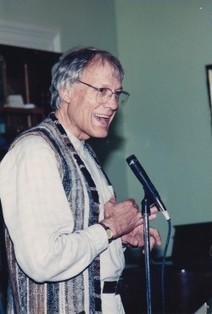 Walter Wink, 76, one of the most creative and influential scholars of our day, died peacefully at his home in Sandisfield in the Berkshire Mountains of Massachusetts on May 10, 2012.

Wink’s breakthrough insights about the contemporary meaning of the principalities and powers, and Jesus’ third way of dealing with the enemy/oppressor – neither fight nor flight but nonviolent resistance – spoke powerfully to the struggle and transformation experienced in the self-giving love of Jesus. This found eager audiences in churches, retreat centers, peace and justice groups, and in many places – East and West Germany; Northern Ireland, Scotland, and England; South Korea; Palestine; Aotearoa New Zealand; Chile, Mexico, and throughout the Americas. Walter’s wife June, dancer and potter, traveled with him and was an integral part of the workshops that integrated mind, body, and spirit in the experience of the participants. In 2006 they were honored with FOR’s Martin Luther King, Jr. Peace Award.

No remembrance of Walter Wink is complete without highlighting his commitment to the way of prayer as essential to deeply rooted activism. “Nonviolence is an aperture open to God,” he writes. “It is intercession in action.” He continues (in The Powers That Be): “the struggle against evil can make us evil, and no amount of good intentions automatically prevents its happening. The whole armor of God that Ephesians 6:10-20 counsels us to put on is crafted specifically to protect us against that contagion of evil within our own souls, and its metals are all forged in prayer.”

Thoughts have been swirling around like a sandstorm about work, things I’ve been reading, household tasks, finances, concerns about people, a yard that needs mowing, loose ends, projects, etc. etc. The other day I told my wife: “I’m t…

See on Scoop.it – Restorative Communication SAN JOSE – Restorative Justice: Veterans treatment courts make differences in the lives of those who […]

“Gratitude is when memory is stored in the heart and not in the mind.”Lionel Hampton “Let us be grateful to the people who make us happy; they are the charming gardeners who make our souls blossom.”Marcel Proust Maybe …