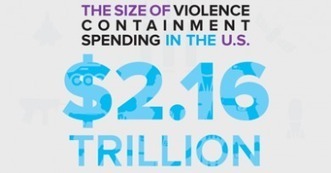 The Institute for Economics and Peace provides a new methodology to categorize and account for the economic activity related to violence.

The size of economic activity that is devoted to inflicting, preventing or dealing with the consequences of violence is known as the Violence Containment Industry (VCI). In the U.S., Violence Containment costs around 15% of Gross Domestic Product each year and is the largest discrete industry.

Violence Containment Spending in the U.S., produced by Institute for Economics and Peace, provides a new methodology to categorize and account for the public and private expenditure on containing violence.

While some spending on Violence Containment is necessary, the question is what is the optimal amount to spend on containing violence while cost effectively investing in future reductions of violence?

-Violence containment cost the U.S. $2.16 trillion per year, that’s one in every seven dollars.

-If violence containment were an industry it would be the largest industry in the U.S.

-Federal expenditure has expanded in the last ten years, increasing by 15%

-A 5% reduction in Violence Containment spending for 5 years would provide the capital to rebuild the nation’s levees systems, update the energy infrastructure and complete the upgrading of the nations school infrastructure.

‘The study evidentiates that even small reductions in Violence Containment spending would result in a meaningful stimulation to the U.S. economy’-Steve Killelea.

What’s the Latest Development?   Mental and vocal monologues are essential in learning and performing better in life. Researchers have identified that talking to yourself is insanely great for the brain. The better you are at self-talk the b…

A psychologist argues that negative emotions are critical for our mental health and should be embraced.Jim Manske’s insight:Can we grow a heart big enough to hold both needs met and unmet, in every moment? Our emotions give us information to impel us…

The myth of normal tells us that that being within the range of what is considered “normal” is a core feature of successfully being a member of society—and that is simply not true. The myth of normal is very strong and very wrong.  Bein…

Allowing into our heart another’s suffering and giving our full presence can be a gift to the other and our self. Here’s how to show true empathy for others. Miki Kashtan, writing for the Tikkun Daily interfaith blog, points…