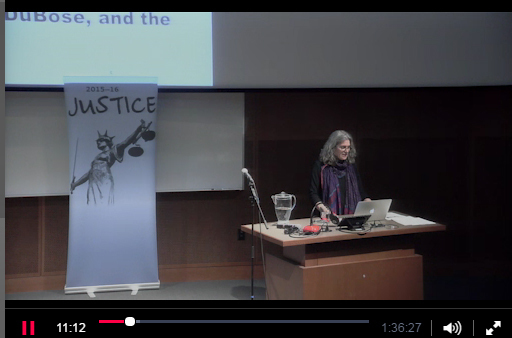 Can empathy play a role in the pursuit of justice, and do either justice or empathy help in thinking about ethics beyond the human? Wesleyan philosopher Lori Gruen explores these two questions in her March 10, 2016 lecture titled “Justice and Empathy Beyond the Human” as the 2016 Robert D. Clark Lecturer in the Humanities. In her talk, Gruen argues that empathy is central to justice, and that it should play a central role in our ethical thinking and in our dealings with all sorts of different others, including other animals.

Gruen’s work lies at the intersection of ethical theory and practice, with a particular focus on issues that impact those often overlooked in traditional ethical investigations, e.g. women, people of color, and non-human animals. She has published extensively on topics in animal ethics, ecofeminism, and practical ethics more broadly, and is currently thinking about intersections of race, gender, and species and, as always, about chimpanzees

Stories of Compassion is part of an umbrella effort called “Compassion Games: Survival of the Kindest,” and it begins Sept. 21. The Compassion Games are sponsored by Compassionate Seattle, United Way of King County, the City of Seattle, and…

An intro to inclusive designhttps://www.microsoft.com/en-us/design/inclusive?ocid=inclusivethefilmA 20 minute short film examining inclusive design as an approach to making and sharing examples from the physical and digital worlds.Having empathy is cri…

Dr. Thomas Keith will join us to discuss his latest filmThe Empathy Gap: Masculinity and the Courage to Change, which looks closely at “key messages about manhood that boys absorb from the culture – that they should acquire materi…

Empathy – Sarah WoodsMonday 10th June, 2013 “I believe that empathy is a feeling of understanding, a feeling for others, It’s a beginning of a relationship”. Marzena Forristal As part of the creation of THE EMPATHY ROADSHOW, I&r…