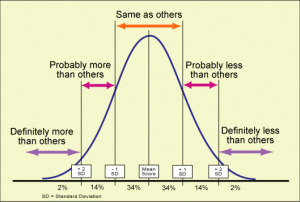 What is a personality disorder? It helps to begin with the visual image of a bell-shaped curve. Using empathy as a personality characteristic, there is the average range of plus or minus one standard deviation (the largest range of the curve).

Everyone within that range, which is the majority of the population, has a normal amount of empathy.

Those, with a standard deviation of greater than one but less than two, has either too much or too little empathy compared to the average (the medium range of the curve in between the largest and smallest sections). More than two deviation points places empathy at the dysfunctional level. This is the point where it becomes part of a disorder (the smallest range of the curve). Do this same procedure for each one of the personality disorder characteristics.

Hillary Accuses of Israel of Lacking Generosity and Empathy with PalestiniansSee it on Scoop.it, via Empathy and Compassion

I had been meaning to better understand the concept of empathy ever since the United States Supreme Court struck down the part of the Defense of Marriage Act of 1996 that denied federal benefits to legally married same-sex couples.My interest…

Empathy is typically seen as eliciting warmth and compassion—a generally positive state that makes people do good things to others. However, empathy may also motivate aggression on behalf of the vulnerable other. Researchers at the State Universi…

Newswise — One year ago, a landmark study led by Mohammadreza Hojat, Ph.D., research professor, Department of Psychiatry and Human Behavior at Thomas Jefferson University, quantified a relationship between physicians’ empathy and their pati…