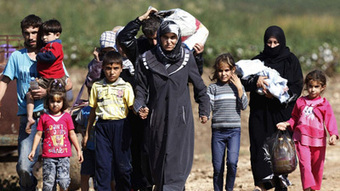 But the UN Secretary General’s spokesperson Stephane Dujarris was quick to push back saying,

“The reaction to the wave of refugees we’re seeing should be one of compassion and empathy.

This should obviously force us to redouble our efforts to find an end to the fighting in Syria. Now obviously, it is understandable that countries need to take whatever measures they need to take to protect their own citizens against any form of terrorism, but I think focusing that on refugees, vulnerable people who are themselves fleeing violence, I think would not be the right way to go.”

A client recently reported her frustration with how her husband “listened” to her when she needed to complain. The word “listened” is in quotation marks because as far as she was concerned he wasn’t listening at all. The p…

A Level 1 workshop is 12 – 14 hours of direct instruction. We begin our journey toward open authentic communication by experiencing the healing power of EMPATHY. This workshop includes a small amount of theory and many experiential activities.&nbs…

In a world where we tend to think of business in terms of the bottom line and financial metrics, a discussion of the role of empathy in business seems like an indulgence. But is it really an indulgence, or is it a marketplace imperative instead?There i…

Is it permissible to harm one to save many? Classic moral dilemmas are often defined by the conflict between a putatively rational response to maximize aggregate welfare (i.e., the utilitarian judgment) and an emotional aversion to harm (i.e., the non-…