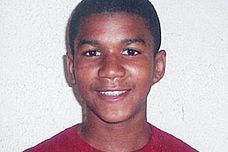 “And by empathy here, I don’t mean merely the ability to feel for the family of this murdered child. I’m guessing most all can manage that much. Rather, I refer to the kind of empathy too rarely attainable, by whites in particular, in the case of black folks who insist, based on their entire life experience and the insight gained from that experience, that their rights to life and liberty are too often subject to the capricious whims of those with less melanin than they, and for reasons owing explicitly to the color of their skin.

Empathy — real empathy, not the situational and utterly phony kind that most any of us can muster when social convention calls for it — requires that one be able to place oneself in the shoes of another, and to consider the world as they must consider it. It requires that we be able to suspend our own culturally-ingrained disbelief long enough to explore the possibility that perhaps the world doesn’t work as we would have it, but rather as others have long insisted it did.

Empathy, which is always among the first casualties of racist thinking, mandates our acceptance of the possibility that maybe it isn’t those long targeted by oppression who are exaggerating the problem or making the proverbial mountain out of a molehill,”

This kit is all about Empathy, a trait I long for my children to possess. It was so much fun to get out all the activities included and play with my daughters, all while teaching them a valuable life skill. What more could you want?Here’s what&rs…

There are two major ways that we feel empathy. Physical empathy is when we feel things that other people are feeling but we feel them in our bodies. That means when you are picking up something from someone you feel it in your body. Often, touch is req…

The latest way into health-care change is empathy-based design thinking. Some of health care’s heavyweights have already invested it: The Mayo Clinic, for example, opened an innovation center in 2008, and Massachusetts General Hospital has design…