Home » News » This Will Make You Smarter: 151 Big Thinkers Each Pick a Concept to Enhance Your Cognitive Toolkit 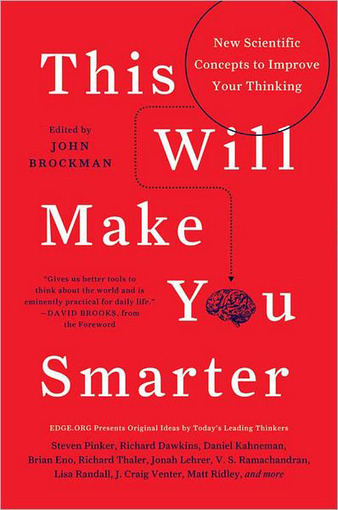 Every year for more than a decade, intellectual impresario and Edge editor John Brockman has been asking the era’s greatest thinkers a single annual question, designed to illuminate some important aspect of how we understand the world. In 2010, he asked how the Internet is changing the way we think. In 2011, with the help of psycholinguist Steven Pinker and legendary psychologist Daniel Kahneman, he posed an even grander question: “What scientific concept will improve everybody’s cognitive toolkit?” The answers, featuring a wealth of influential scientists, authors, and thought-architects, are released today in This Will Make You Smarter: New Scientific Concepts to Improve Your Thinking — a formidable anthology of short essays by 151 of our time’s biggest thinkers on subjects as diverse as the power of networks, cognitive humility, the paradoxes of daydreaming, information flow, collective intelligence, and a dizzying, mind-expanding range in between. Together, they construct a powerful toolkit of meta-cognition — a new way to think about thinking itself.

As infinitely fascinating and stimulating as This Will Make You Smarter: New Scientific Concepts to Improve Your Thinking is, its true gift — Brockman’s true gift — is in acting as a potent rupture in the filter bubble of our curiosity, cross-pollinating ideas across a multitude of disciplines to broaden our intellectual comfort zones and, in the process, spark a deeper, richer, more dimensional understanding not only of science, but of life itself.

The text of the answers is also available online in its entirety.

A “bellringer” is a short activity that some teachers put on the board in the beginning of a class so students have something to do while attendance is being taken. Recently, one teacher among a quietly growing group triedsomethin…

Our world is pretty messed up. With all the violence, pollution and crazy things people do, it would be easy to turn into a grouchy old man without being either elderly or male. There’s certainly no shortage of justification for disappointment and cyni…

Much of our unhappiness springs from the fact that we’re terrible at accurately remembering how things made us feel in the past, so we make bad choices regarding the future.See it on Scoop.it, via Radical Compassion