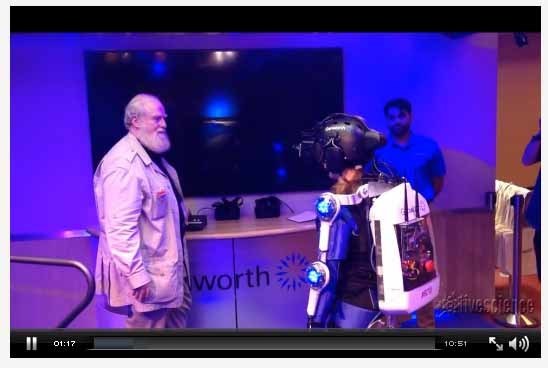 Laura Geggel, the Live Science reporter who tried on the suit in the video above, wrote afterwards that she “vowed to stop mindlessly walking so fast with my older relatives.”

But do empathy simulators like the R70i actually inspire people to make long-term, significant changes in how they treat people who are different from them?

I don’t have a concrete answer to that question, but it’s one that I’ve asked myself a lot since “empathy games” and “empathy sims” have become so popular, particularly in the video game space and now, increasingly, in the VR and technology space. Just yesterday, I received a press release about a VR empathy simulator called The Migraine Experience, which was created by Exedrin (as in, the migraine relief drug); that game also claimed to “foster empathy.”

As a person who has gotten debilitating migraines since the age of 12, I thought the VR game sounded like a very strange way of fostering “empathy.”

Is it permissible to harm one to save many? Classic moral dilemmas are often defined by the conflict between a putatively rational response to maximize aggregate welfare (i.e., the utilitarian judgment) and an emotional aversion to harm (i.e., the non-…

It’s hard to admit this, but sometimes I can be kind of a B. Maybe I had a bad day, maybe I haven’t eaten in the last three hours…but in any case, I’ve been known to snap at my man or give the side-eye to the woman taking forever …

An empathy map is a collaborative tool teams can use to gain a deeper insight into their customers. Much like a user persona, an empathy map can represent a group of users, such as a customer segment. The empathy map was originally created by Dave Gray…

Robert McKee explains what a writer should and should not do when trying to create empathetic characters.See it on Scoop.it, via Empathy and Compassion