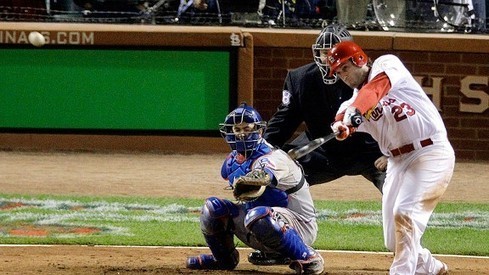 The science behind watching the game….

The evidence that the spectating brain is also a playing brain has been mounting ever since the early 1990s, when a group of neurophysiologists at the University of Parma, Italy implanted electrodes in the brain of a macaque monkey to find out exactly which neurons fired when the monkey grasped a peanut and brought it to his mouth. The electrodes were placed in the monkey’s premotor cortex, the region known to initiate signals that direct muscle movement in both macaques and humans. The researchers hoped that pinpointing the individual motor neurons that fired when the monkey grasped the peanut might lead to therapies that could help brain-damaged humans recover hand function.

…about one-fifth of the neurons that fire in the premotor cortex when we perform an action (say, kicking a ball) also fire at the sight of somebody else performing that action.

DANBURY — Months before the Dalai Lama’s October visit to Western Connecticut State University, its leaders resolved the university would honor his message of compassion and tolerance once the Nobel Peace Prize laureate moved on.Now that res…

by Kristie WangThe David and Lucile Packard Foundation and Ashoka Changemakers have announced the six winners of Building Vibrant Communities: Activating Empathy to Create Change! The challenge sought local initiatives that tap the power of empath…