Home » News » The Varieties of Empathy in Science, Art, and History 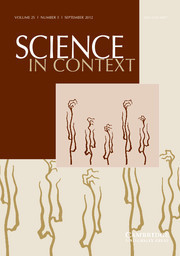 Science in Context is an international journal edited at The Cohn Institute for the History and Philosophy of Science and Ideas, Tel Aviv University, with the support of the Van Leer Jerusalem Institute.

The new English term “empathy” was translated from the German Einfühlung in the first decade of the twentieth century by the psychologists James Ward at the University of Cambridge and Edward B. Titchener at Cornell. At Titchener’s American laboratory, “empathy” was not a matter of understanding other minds, but rather a projection of imagined bodily movements and accompanying feelings into an object, a meaning that drew from its rich nineteenth-century aesthetic heritage. This rendering of “empathy” borrowed kinaesthetic meanings from German sources, but extended beyond a contemplation of the beautiful to include a variety of experimental stimuli and everyday objects in the laboratory….

Self-Projection: Hugo Münsterberg on Empathy and Oscillation in Cinema Spectatorship

The Strength of Weak Empathy

The Social Brain and the Myth of Empathy

Einfühlung and Abstraction in the Moving Image: Historical and Contemporary Reflections

Those summer classes taught me how to be a good listener, how to utilize my strengths and how to step outside of my comfort zone day after day. They also taught me empathy, perhaps the most valuable lesson of all.Empathy is not easy for any one of us t…

If you’re an empathetic person — good at connecting with other people’s feelings — can that help you win prestigious jobs that pay $100,000 a year or more? Or will you be stuck at the low end of the pay scale, doing a lot to promote rapport and smoot…

jiwaSee it on Scoop.it, via Empathy and Compassion

The ‘care ethic’ leads campus activists and administrators to squelch uncomfortable speech, with few limits. And that impulse is increasingly global, new book says.The Tyranny of the ‘Care Ethic’While Lukianoff asks readers, many of whom ar…