Home » News » » The Reciprocity Ring: A New Take On Giving – World of Psychology 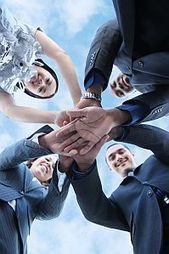 When Irvin Yalom did his pioneering work in the 1970s on group therapy he included altruism, vicarious learning and hope among the original therapeutic factors. Forty years later a new application of group dynamics has emerged with renewed vitality: Welcome to the Reciprocity Ring.

In Give and Take: A Revolutionary Approach to Success, Adam Grant has awakened a method for engaging the act of giving and receiving. He is a gifted storyteller and a consummate teacher and researcher. As the youngest tenured professor at the University of Pennsylvania’s Wharton School of Business, he has put forth a precisely organized and exceptionally well-crafted book.

He uses several methods to make his point. Among them he includes expertly constructed true stories, case studies, research and a very rich chapter on resources for information. Make no mistake: This is not another business book with some ideas about doing more and better business.

This book is different because it is evidence-based and because it lays bare the approach to success as a dynamic feature that exists through the exchange that happens between people — not only people looking for higher profits, but those who strive to be successfully engaged in their lives and careers. As the title suggests, this is no ordinary approach. Revolutionary is, indeed, the correct term.

The Reciprocity Ring exercise, described in detail in toward the end of the book, uses the power of a group’s giving capacity to advance or outright bestow the requests from each of its members. It is targeted to help enhance the quality of our whole lives. Grant tells tales of its use and in one instance a pharmaceutical executive saved $50,000 to synthesize an alkaloid because a member in the group offered to do this for free. In another, someone obtained a highly sought-after job at Google. In yet another, specialized garments were made for an individual with a physical handicap.

The event is typically around two and a half hours and the results can be very powerful. Grant notes some of the companies that have participated in the exercise include Bristol-Myers Squibb, IBM, Boeing, Citigroup, Estee Lauder, UPS, Novartis, and GM: Not a shabby list.

The method was developed by University of Michigan sociologist Wayne Baker and his wife Cheryl at Humax. A group is gathered for the purpose of members asking for something important for them in their personal or professional lives.

The request is put out to the group and participants make connections, offer introductions, contacts or more tangible help with achieving the goal. The amazing thing is that the requests — even some far-fetched ones — get granted.

It sounds almost too good to be true, but I twice have had the opportunity to be part of these exercises and have been stunned not only by what people can do to help others, but by what I was able to contribute. Giving can indeed be contagious. So let’s break this down: How does it work?

How Does the Reciprocity Ring Work?

At the very core of the Reciprocity Ring is a stunning fact drawn from research: We tend to underestimate the number of people who will give.

In a competitive, often zero-sum culture like the United States we imagine that people are “takers,” a term Grant uses to describe people who are self-interested and do not share resources or ideas. In such an environment others are perceived and predicted to be reticent and unforthcoming. In turn, a “giver” is restrained and less conspicuous about their giving. They don’t want to be an outlier and this inhibition generates a self-fulfilling prophecy.

But when a group is assembled with the goal of giving, the manacles of perception are removed and replaced by a charitable mood. Research shows that about 90 percent of all giving exchanges at work came about in a response to a direct request for help. Since the culture created by the Reciprocity Ring invites giving, it diminishes the inhibition to give. Participants don’t find themselves embarrassed or constrained.

Yalom’s work on therapeutic factors indicated that when these factors are present, the group is a viable forum for well-being. Altruism, vicarious learning, and hope are therapeutic factors are said to be inherent in a group process. Therapeutic factors are specific experiences which can occur in many types of groups, and which lead to positive psychological change. Each of these factors defines an influential property that emerges in the group and informs the dynamic. Specifically, the activation of altruism, vicarious learning and hope are the mechanics underneath the Reciprocity Ring.

In altruism members spontaneously help other group members. This helping is usually unsolicited and is the result of an unselfish desire to be of assistance. Helping others without the need to have that help reciprocated is the cornerstone of altruism. What is unique in the reciprocity ring is that someone else’s giving rewards the spontaneous nature of helping. The atmosphere that evolves comes as a result of the confluence of spontaneous altruistic behavior, witnessing this behavior in others (vicarious learning), and the net result of hope that your offer to help others is successful, and that your request is fulfilled.

The Reciprocity Ring is a highly worthwhile exercise to learn about and take part in and help create. For more information on resources and how to start your own go to giveandtake.com, andhumaxnetworks.com

“We’re in the midst of something here, and now is a time to act, and to let the power of our grief not just unite us, not just invite us to reflect, but to move forward together, and to cross those lines that we so often use to divide.”See it on …

The moment you get effortlessly lost in work goes by any number of names: focus, concentration, escapism, flow, and countless others. It’s the point where you’re able to blur the world around you and calibrate your brain to pay attention to one si…