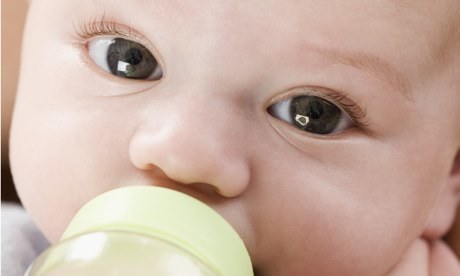 If you have any experience of babies you’d be forgiven for thinking of them as entirely selfish, self-oriented little beasts with scant regard for others. It has long been thought that children are born amoral and that it is the job of their culture to teach them the difference between good and bad. However, studies with very young babies suggest that they might be much nicer than we previously thought.

For instance, babies seem to empathize with the distress of others – crying in response to the cries of other babies and stroking or offering toys to those who seem to be upset. Babies also spontaneously help strangers who are struggling. When experimenters acted out a range of troublesome scenarios such as trying to open a cupboard with their hands full or straining to reach a dropped peg – 1-year-olds came rushing to their assistance, sometimes traversing extensive obstacles to do so. And it’s not just that babies happen to like picking up dropped pegs. If the experimenter was straining to reach a peg that they had deliberately thrown down, rather than accidentally dropped, babies didn’t come to their rescue.

These findings suggest that young children may have natural inclinations to assess the intentions of those around them and to help them achieve their goals when they seem to be struggling. The experimenters were unfamiliar to the babies yet they tried to help them spontaneously and without any encouragement from their parents or any reward. If you watch the linked videos above, you’ll note the experimenter doesn’t even thank them. The authors of these studies interpret this behaviour as evidence that the rudiments of empathy, compassion and altruism may already be in place much earlier than expected, perhaps even from birth. But simply feeling for someone’s anguish isn’t necessarily as sophisticated as reasoning about good and bad.

To explore the roots of this sort of moral evaluation, researchers at the Universities of Yale and British Columbia showed babies a display in which puppets help or hinder each other. For instance, one character will attempt to travel up a hill and either be pushed down or helped up by other puppets. Given the option afterwards, almost all babies will choose to play with helpers and not hinderers. What this suggests is that babies from as young as 6-months of age are making judgments about ‘good’ and ‘bad’ behaviour. And, like most adults, they have a preference for good.

What’s more, babies seem to think that bad behaviour should be punished. Anecdotally, the researchers report that babies go beyond simply choosing the good puppet over the bad one. They also smile during the helping episodes and shake their heads sadly during the hindering episodes, sometimes even giving the hinderer a good smack around the chops before choosing to play with the helper.

This taste for retribution has been shown experimentally as well. Eight-month-olds watched the display shown in the linked videos, in which the dog in the blue shirt helps the rabbit by returning its ball and the dog in the yellow shirt selfishly runs off with it. Babies subsequently gave treats to the helper but took treats away from the hinderer.

This desire to see selfish acts punished is nuanced. On the whole, babies always prefer to play with characters who have acted kindly and not with those that have acted selfishly. However, it depends on context. Babies from 8 months will sometimes reward mean behaviour if it is directed towards a puppet who was observed acting selfishly in the past. Not only do babies deliver retribution themselves, they also seem tovalue it in others.

Most of these studies have been conducted on babies from around 8-months of age but the findings have been replicated with babies as young as 3-months. It is unlikely that they could have learned about rewarding good behaviour and punishing bad behaviour in so short a period. Even if this sort of evaluation could be learned that quickly, many of these babies did not have brothers or sisters so would have few opportunities to witness episodes that model moral behaviour.

The authors interpret the results as evidence that judgments about ‘good’ and ‘bad’ behaviour might be inborn. They may have evolved over millennia of living in groups where working together and protecting our kin have proven beneficial. Adult morality is a great deal more complex than that seen in babies but this raft of research suggests that, rather than having to be learned, the emotional roots of niceness might be in place right from the get go.

Jim Manske’s insight:
For me, this points to our universal, basic human nature. I prefer not to add the overlay of beliefs concerning punishment and reward being imbedded into us. That seems like a concept that we lay on top of the compassionate consciousness we are innately equipped with to make life on this planet more workable.

What do you think/feel?

Living an abundant life derives from traveling a journey of intentional self growth. Here are 5 simple ways to live an abundant life through self simplicity.See it on Scoop.it, via Radical Compassion

TED Talks What drives our desire to behave morally? Neuroeconomist Paul Zak shows why he believes oxytocin (he calls it “the moral molecule”) is responsible for trust, empathy and other feelings that help build a stable society.See it on Scoop.it, via…

The potential for photography to change the lives of the incarcerated, particularly the young prisoners, is significant. Photography education provides all the therapeutic tenets of arts programming, but also develops new skills; visual literacy, compu…