Home » News » The Heroes of the Hurricane: Jen Doll 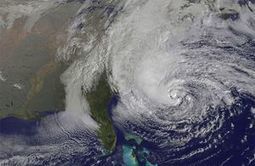 There are plenty of people who have behaved not just decently but positively heroically during and following Sandy’s hit on New York City and the surrounding areas. Let’s all take a moment to thank them for restoring our faith in humanity:

The nurses and medical professionals who evacuated patients from New York University’s Langone Medical Center when their backup generator failed. Last night, when the power failed, approximately 1,000 hospital staffers (doctors, nurses, residents, and medical students), along with firefighters and police officers, carried some 260 patients down 15 flights of stairs, in the dark, with flashlights, to ambulances that transported them to other area hospitals. According to CNN, the hospital lost power around 7 p.m. Monday after lower floors and elevator banks filled with 10 to 12 feet of water, and though emergency generators kicked in, “two hours later, about 90% of that power went out, and the hospital decided to evacuate their patients.” Evacuating hospital patients takes some time and much care, as one can imagine; as of 9 a.m. today 40 or so remained. Some of those evacuated last night were 20 babies from neonatal intensive care. Via CNN:

Four of the newborns were on respirators that were breathing for them, and when the power went out, each baby was carried down nine flights of stairs while a nurse manually squeezed a bag to deliver air to the baby’s lungs.

From a first-person account of the situation via BoingBoing, patients too sick to walk “were painstakingly carried on plastic sleds — one by one — by teams of four to five people from as high up as the 17th floor.”

Elmo. Soothing schoolkids and adults alike, Elmo went on WNYC’s Brian Lehrer Show Tuesday morning to explain Hurricane Sandy to people—he and “his mom” stocked up on peanut butter and canned tuna prior to the storm and afterward “got to help put Big Bird’s nest back together again,” he told everyone. Then he remind them that he loves them. Aw. (Thanks to WNYC, too, for this.)

Lydia Callis, Mayor Bloomberg’s sign language interpreter. Please don’t call her “Mayor Bloomberg’s sign-language lady,” she has a name, and she is awesome. One of the tireless crew of New York City government employees working to inform people about what’s happening and what to do in a time of Sandy, she’s not only a vibrant, expressive communicator (even to those who don’t know sign language; just watch, video below, she’s on the left)—she’s doing double duty by generating memes and inspiring tribute Tumblrs. If that’s your thing. Via NPR’s Mark Memmott, “her expressive style has fascinated many and provided a bit of a bright light amid all the dark news about Superstorm Sandy.”

John Davitt, NY1 chief meteorologist, and his cohort. Davitt, who’s weathered the storm right with us, looks incredibly tired and well-deserving of a good bit of rest, but as of this morning, he was still going. His NY1 bio explains, “John’s most exciting story at NY1 was the Blizzard of ’96,” but we think it’s time for an update. We’d like to add a shout-out to everyone at NY1, the reporters and newscasters, weather and traffic folks and people behind the scenes, who have managed to remain calm and reasonable even during the most trying times of the storm. As a plus, they have also, by and large, avoiding standing in large rivers of water for lengthy amounts of time (those cable news reporters make us very, very nervous).

Let’s add a hearty thanks to all the meteorologists who predicted starting last week that Sandy was going to be pretty much as she was, told us all to prepare, and have kept us posted throughout. As TNR’s Nate Cohn writes, “Despite the odds, it was as early as last Tuesday when the European model showed Sandy transforming into an extraordinarily intense hybrid storm and making landfall in the mid-Atlantic. Back then, Sandy was a small and utterly conventional tropical cyclone off the northern coast of Venezuela.” This is no small feat, it’s “just about the highest accomplishment in forecasting.” Those who called it: You can say, “We told you so,” now. And final related kudos for modern technology.

Want to add to this story? Send an email to the author at jdoll@theatlantic.com.

Professor Simon Baron Cohen, of the Cambridge Autism Research Centre, is the guest speaker for the final Science Society seminar of the term. He will consider “The Nature of Empathy: Perspectives from Psychiatry” at 6.00pm on Friday 3 June in the O…

Cancer doctors want to offer a sympathetic ear, but sometimes miss the cues from patients. To help physicians better address their patients’ fears and worries, a Duke University researcher has developed a new interactive training tool.See it on Scoop.i…