Home » News » The greatest meeting of strangers in history 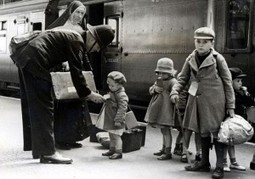 I am in the midst of a long-term project to document instances when empathy has flowered on a mass scale and shifted the course of human history. While empathy has periodically collapsed on a collective scale – just think of colonialism in Latin America or the Holocaust – there have also been moments when it has emerged as a force for positive and radical social change.

If we want to tackle today’s global crises – from wealth inequality and armed conflict to climate change and food insecurity – we need to learn from the past and understand how empathy can be harnessed as a powerful tool to shift human behaviour and ignite social action. And one of the most interesting places to look is the evacuation of British children in World War Two.

Following the reprehensible attack on Christian homes in Lahore, a spine-chilling image of an arsonist cheering over the burning flames went viral. One wonders how human beings can become capable of such naked, audacious sadism.Throughout history, huma…

The evidence for empathy in elephants seems overwhelming, so can we now draw on our own empathetic nature to end their slaughter?Elephants, we all know, are in peril. We humans are waging what amounts to a war against them because they have something w…

The term’s only been around for about a century—but over the course of its existence, its meaning has continually changed.In a column for The New York Times this past January, Nicholas Kristof lamented what he called the country’s &ld…