Home » News » The Golden Rule: Theirs and Ours by Paul Street | Gary Olson, Empathy Imperiled: Capitalism, Culture, and the Brain e 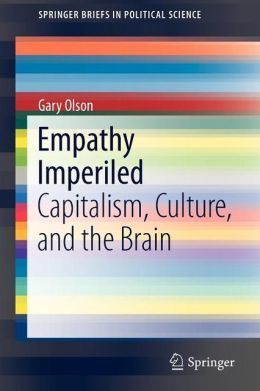 Think of the values and ideas we left progressives tend to identify with and defend and advance against those rapacious “1%”’ masters of capital, for whom the Golden Rule is that “those who have the gold deserve to rule.” Words that first come to mind probably include solidarity, democracy, the common good, equality, justice, peace, and dignity. Other terms might arise: human rights, socialism, freedom, liberty, the commons, people over profits, and people’s power.

Here’s one you might not think to mention: empathy. Empathy, which Gloria Steinem once called “the most radical of human emotions,” means the ability to put oneself in another’s shoes – to understand and sense what that other is experiencing and feeling. In Christian terms it refers to the decision to “love your neighbor as yourself,” yielding the original Golden Rule:  “do unto others as you would have them do unto you.” In Buddhist terms, empathy means exchanging oneself for others, subordinating ego to what the Vietnamese Buddhist monk Thich Nhat Hanh calls “interbeing.” It means abandoning the standard reigning Western sense of a solid, separate self apart from other sentient beings and the earth we share.

Lesa Walker discusses how she has implemented a unique empathy-driven project in schools across the United States and in Ghana. Please describe what the Olymp-i-a Challenge is all about and how you got involved in this project. As a public he…

UnSelfie: Why Empathetic Kids Succeed in Our All-About-Me World by Michele Borba Dr. But there’s another concern: over-sensitivity can also cause an Empathy Gap. Instead of using his urges and step in to help a friend in need, the child…

The way we treat immigrants is wrongheaded and counterproductive. Yes, they really are acting out of loveOne of the most important takeaways from the 2012 election was that Republicans were suffering from a perceived “empathy gap.” Exit pol…

Jan Birchfield, Ph.D. writes about the basis of a shared ethic in leadership—happiness—and why we should look inward before trying to solve the world’s problems.Social entrepreneurship has given me, and many others, a great …