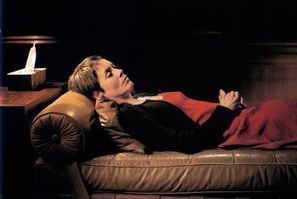 Empathy reverses the psychoanalytic gaze back onto the psychoanalyst. Three genres—fiction, screen test & documentary interview—provoke questions about power, manipulation and understanding. A fictional narrative about a voice-over actress in psychoanalysis interweaves with “screen tests” of actresses auditioning for her role in Empathy, as well as interviews with actual psychoanalysts.

As the film unfolds, the genres collide and break apart: individuals from interviews begin to appear in the fictional space of the narrative, television documentary is parodied in a film-within-a-film essay on modernism & psychoanalysis, the actor playing the fictional analyst reveals himself to be one in real life… Empathy enacts issues of disclosure, identity, sexual exploitation, and voyeuristic transgression of private space turned public.

Narcissism, or excessive love of oneself, is not just an unattractive trait, it’s physically damaging for men too, scientists say.   Researchers at the University of Michigan found that men who have this personality trait — characteris…

Self-EmpathyAt times our behaviors keep us from meeting our greatest needs. Say longing for deep connection with others, but afraid of it, so people get pushed away. Then telling yourself no one likes you. Often resulting in depression, loneliness, and…

CHANGE YOUR MIND CHANGE THE WORLDWelcoming His Holiness, the 14th Dalai Lama, and some of the world’s most respected thought leaders to discuss how neuroscience, environments, economics, and healthcare can combine to…