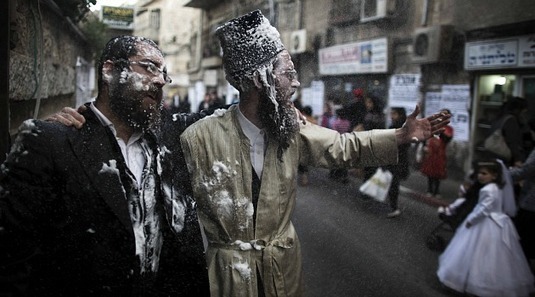 Barack Obama shrewdly tapped into ‘Passover empathy’ in his pro-peace speech in Israel. Will it be enough to overcome the trepidation that ‘Purim Jews’ feel?

It was in the “peace is possible” segment of the speech, an assertion he knew would be greeted skeptically by Israelis and Palestinians, in which Obama implored the audience to build trust in one another and recognize their shared human strivings. “That is where peace begins — not just in the plans of leaders, but in the hearts of people; not just in a carefully designed process, but in the daily connections, that sense of empathy, that takes place among those who live together in this land.” The words in italics weren’t in the president’s prepared remarks destributed by the White House.

Empathy with others seems to be due to a type of brain cell called a mirror neuronChristian Keysers has a good way of making his point.  He shows his audience a clip from a James Bond movie in which a large, hairy spider is climbing over our hero’…

Social and emotional learning (SEL) involves acquiring and effectively applying the knowledge, attitudes and skills to understand and manage emotions, set and achieve positive goals, feel and show empathy for others, establish and maintain positive rel…

TACTICS commonly used by schools to deal with cyber bullies, such as asking them to show empathy towards their victim, are ineffective in dealing with some of the worst offenders, new research has found. Despite the millions of dollars spent on program…

THE MOST IMPORTANT EMOTIONAL SKILL IN RELATIONSHIP-BUILDING IS ALSO ONE THAT MOST OF US NEED TO WORK ON.While psychologists believe that infancy is a critical time for us to learn empathy, we also know that we can increase it throughout our lifetime. T…