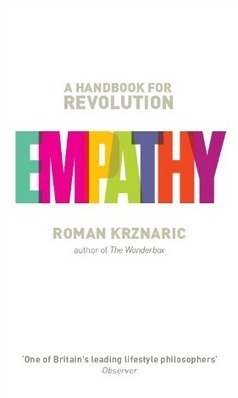 It’s our first column for 2014 and it’s fair to say that Barry and I are aiming straight and unabashedly for the heart with Roman Krznaric’s Empathy: A Handbook for Revolution.

There’s sound reason why one of Britain’s leading ‘cultural thinkers’ would tackle such a weighty topic. As Krznaric writes, empathy (the ‘Golden Rule’) has its foundation in major spiritual traditions including Buddhism, Confucianism, Judaism and Christianity. Empathy, he adds, lies ‘at the very core of human existence’.

empathetic, but what does it mean..

Most of us like to see ourselves as empathetic, but what does it mean to really ‘imagine oneself in another’s place and understand the other’s feelings, desires, ideas, and actions’?

By Barry Gittins and Jen Vuk

In Chris Kluwe’s TED Talk, the former NFL punter shares his excitement that augmented reality will soon be everywhere. He focuses on the role it will play in sports, particularly for fans who want to experience the action in the shoes of the…

There she explained how the mass dominance of male stories forced generations of women to develop an empathy for characters in a way men are rarely challenged to do.This act of empathy, that women go through from the time we’re little girls &mdas…

The Great Library of Alexandria, which was founded in Egypt in the third century BC, aspired to be a depository of all knowledge in the ancient world. Building up the global empathy movement requires a new kind of library that is perhaps less wide-ran…