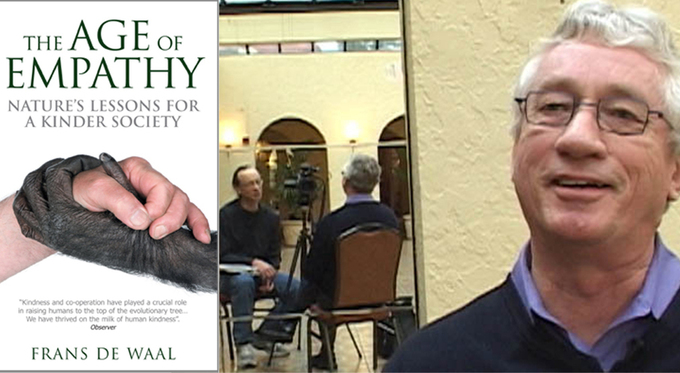 “Empathy is one of those traits that humans over-estimate the complexity of. And that’s why if you tell the average psychologist, you say that there is empathy in animals, they will say that’s not possible. Because they think empathy means that you consciously put yourself in the shoes of somebody else.

Frans de Waal is a psychology professor at Emory University with a Ph.D. in biology. He is the author of many books, including Chimpanzee Politics,  Our Inner Ape and The Age of Empathy: Nature’s Lessons for a Kinder Society. The director of the Living Links Center at the Yerkes National Primate Research Center in Atlanta, de Waal was ranked among the World’s 100 Most Influential People of 2007 by Time.

Spanning from care-giving infants and civilian rescuers risking their life to the collapse of empathy in agents of torture and extinction, this unique book deals with and illustrates the altruistic best and atrocious worst of human nature. It begins wi…

by Lisa FullerAs the mother of a middle school girl, I struggle to be empathetic without jumping on the roller coaster of her ever-changing moods, emotions and dramas. And, as a woman in her late 40s, my emotions are often a 6 Flags of hormonally-…

We hear a lot about how to speak well in public, but very little about how to learn the equally important art of listening properly to others.See it on Scoop.it, via Empathy and Compassion

In recent years schools have been hyper-focused on academic assessment—and the result, some critics say, is too little emphasis on other needed skills, such as understanding and managing emotions, feeling and showing empathy for others, establish…