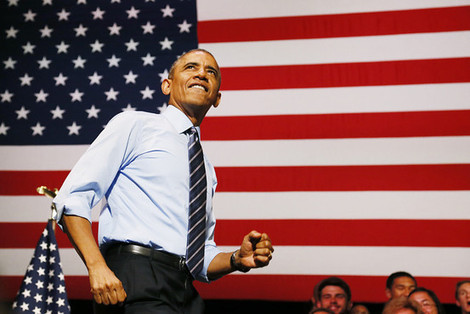 In The Wall street Journal, Wonder Land columnist Dan Henninger writes that Obama’s words can move factions, but not a people.

The Obama gift is, or was, empathy. Every politician since Julius Caesar has known how to do empathy. Bill Clinton summited empathy’s Everest with, “I feel your pain.” But the Obama style of empathy hasn’t matched the office he achieved.

It started with all those weird, dropped “g’s.” A cranial gong goes off when Barack Obamastarts droppin’ “g’s.” The American president who is seen discoursing eloquently at the African leaders summit hits the stump and suddenly he sounds like Gabby Hayes. “Folks like you are havin’ a hard time makin’ it when the wealthiest are grabbin’ it all in for themselves.”

What is worse, Mr. Obama has used his empathy gift only in one direction—to animate his base against opponents.

It worked for him. He won re-election.

Cultivating empathyThe sobering news is that changes underway in higher education are moving us away from the goal of creating a culture that nurtures empathy.For example, if the culture surrounding us truly shapes our capacity for empathy, then colleg…

Violence and disparities in health and education can chip away at empathy, or jeopardize it all together.One of the biggest and most heart wrenching recent examples of the importance of empathy, particularly as it relates to violence in America, can be…

Apart from that brief outburst, the faces of the participants in our Human-Centred Design (HCD) workshop are crinkled with concentration as they calculate the number of carbs they consumed in their last meal. They’re not trying the newest low-carb diet…