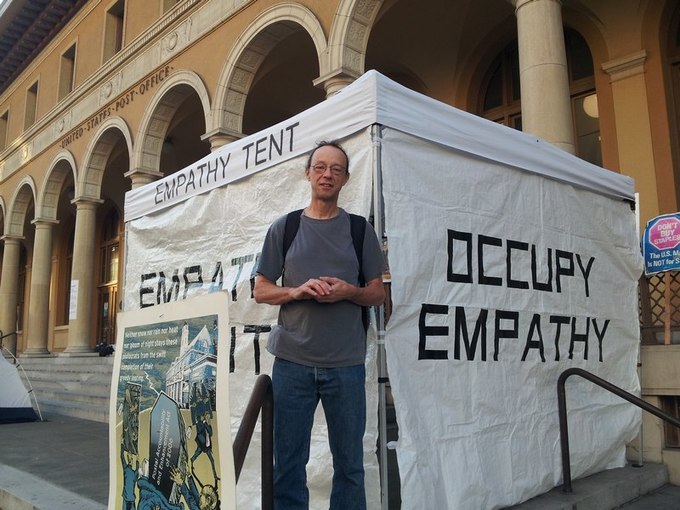 I was planning on setting up the tent today at the Berkeley BART Plaza, but then found out last minute that there was a marathon starting around the corner next to the Post Office where we had set up before.. There were around 6,000 people there, so I set up the tent on the Post Office steps next to our friends First they came for the homeless from the post office protest.. The tent was high up on the steps so everyone could see it.

I handed out flyers to people that walked by and engaged them in a dialog about how to create more empathy in the world. As usual, had some very enjoyable dialogs. Also did some empathic listening with people. One guy and his son were from Stockton, he felt the empathy movement (and movements in general) needed martyrs. Any volunteers? One was an Asian mother and daughter who were very concerned about empathy for animals.I invited her to set up a table at the tent supporting ‘Empathy for Animals’.

One young guy who was working for the race for 3 days felt people are too isolated in their own homes and need to live in intentional community and that would create more empathy. Another was an African American 70 year old woman who had concern and care about the situation in the black community and the historical effects of slavery. Lots of encounter like that.

Needing More Support
I do find I need more support for the next steps with hosting the tent.. This was a good prototype to see how it worked setting up the tent. I’m looking for how to start building that support. Any ideas?
I’m thinking of regular Sunday meetings at the Paris Baguette cafe next to the Bart station..

The Center for Compassion and Altruism Research and Education at Stanford brought together leaders in business and academia to talk about the role of compassion in business. The latest research suggests that a more compassionate workplace, where h…

“Medical humanities is a way of sensitizing students and doctors and nurses to the experience of illness,” Stephen G. Post, the center’s director, said. “And that in turn builds empathy because you can’t have much empathy …

“The children who had a greater awareness of how badly one feels when others fail to share with one were more generous in a subsequent resource allocation task,” said researchers Markus Paulus (Professor of Developmental Psychology and the …

Camp Empathy is a 30 day guided virtual camp that will fill your summer with fun activities, family connection, and wonderful learning about kindness, gratitude, and empathy.It will encourage your children to stretch their empathy muscles, learning abo…