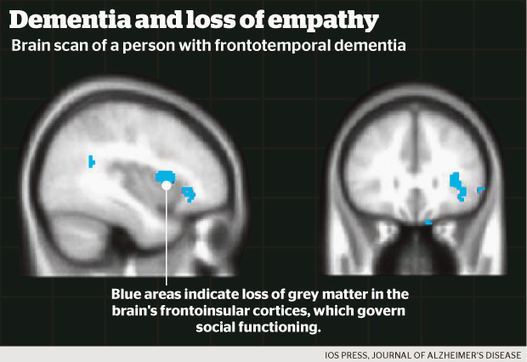 … a study published in the Journal of Alzheimer’s Disease may give comfort to carers who have borne the brunt of these changes. It indicates that the changes result from fading grey matter in the region of the brain that governs empathy.

Both the experimental groups had reduced capacity to understand and appreciate the emotions of others, known as cognitive empathy. But the bvFTD patients were significantly more impaired when it came to sharing the emotions and emotional experiences of others – or affective empathy.

The impairment in cognitive empathy among the Alzheimer’s group was found to be a consequence of their overall cognitive decline, rather than an impairment in empathy per se.

Everybody is empathetic, some are excessively so. Here a few signs which are very attributable to an EE. If someone is awkward in normal situations or normal in what’s usually a very awkward moment.A person who never jokes on another person who&r…

Cyberbullying and narcissism can be side effects of social media, but it and other new technologies can also expand compassion. By Sara Konrath We are at the dawn of an era of powerful new tools, which, like many tools, can be used to build or to…

Two separate studies have recently demonstrated that humans can, in fact, empathize with their robotic counterparts. Although some theorize that they could one day take over the world, one group of scientists was curious about whether humans are …