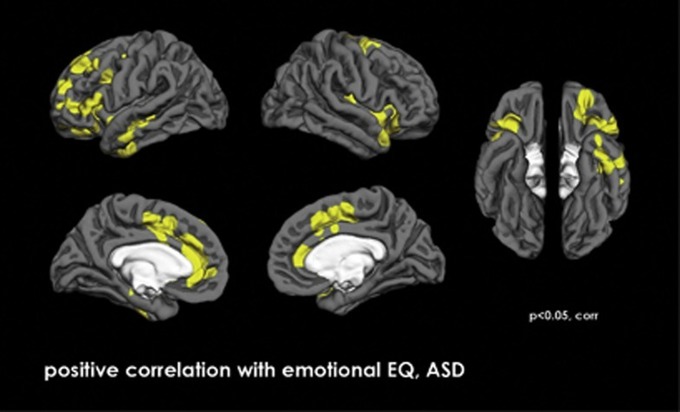 Perceiving others in pain generally leads to empathic concern, consisting of both emotional and cognitive processes.

Empathy deficits have been considered as an element contributing to social difficulties in individuals with autism spectrum disorders (ASD). Here, we used functional magnetic resonance imaging and short video clips of facial expressions of people experiencing pain to examine the neural substrates underlying the spontaneous empathic response to pain in autism.

Thirty-eight adolescents and adults of normal intelligence diagnosed with ASD and 35 matched controls participated in the study. In contrast to general assumptions, we found no significant differences in brain activation between ASD individuals and controls during the perception of pain experienced by others. Both groups showed similar levels of activation in areas associated with pain sharing, evidencing the presence of emotional empathy and emotional contagion in participants with autism as well as in controls.

The empathy trap: therapists and counselors almost by definition are empathic, to facilitate clients’ recovery – but this quality can mean those carers are targets for sociopaths, aided by what Dr Jane & Tim McGregor call “apaths”. The first UK art…

In An Epidemic of Empathy in Healthcare, Dr. Thomas H. Lee outlines a strategy for encouraging health care providers to respond more compassionately to their patients’ suffering.  Lee, a practicing physician who has worked on healthcare perf…

Dr. Dan Siegel tells us how mirror neurons work and how humans react when mirror neurons are stimulated.See it on Scoop.it, via Empathy and Compassion