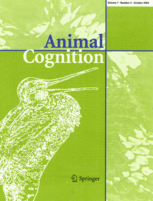 Contagious yawning is a well-documented phenomenon in humans and has recently attracted much attention from developmental and comparative sciences. The function, development and underlying mechanisms of the phenomenon, however, remain largely unclear. Contagious yawning has been demonstrated in dogs and several non-human primate species, and theoretically and empirically associated with empathy in humans and non-human primates. Evidence of emotional closeness modulating contagious yawning in dogs has, nonetheless, been contradictory.

Humans show a developmental increase in susceptibility to yawn contagion, with typically developing children displaying a substantial increase at the age of four, when a number of cognitive abilities (e.g. accurate identification of others’ emotions) begin to clearly manifest. Explicit tests of yawn contagion in non-human animals have, however, thus far only involved adult individuals. Here, we report a study of the ontogeny of domestic dogs’ (Canis lupus familiaris) susceptibility to yawn contagion, and whether emotional closeness to the yawning model affects this.

by ALEX BOZIKOVICArchitects and researchers are increasingly turning their attention to the creation of comfortable school and work spaces for those on the autism spectrumThere was very little research available on the topic, so Paron-Wildes condu…

Empathy isn’t some soft and fluffy add-on best left to the “dolly birds” in HR, but a hard, teachable skill that opens the door to profit. But he wasn’t the only one needing to wake up to the benefits of empathy. The fact is that the corporate world is…

RESEARCHERS HAVE ALSO FOUND THAT KIDS WHOSE PARENTS NEGLECT TO COMFORT THEM DURING TIMES OF DISTRESS FIND IT DIFFICULT TO DISPLAY EMPATHY AND BEHAVE IN A ‘SOCIALLY COMPETENT MANNER.’It’s not hard to see why.Studies have shown that the…

The Global Cognitive Empathy Study (GCES) is a cross-cultural research project; it aims to better understand which cognitive and emotional (intelligence) skills are universal and key to things like leadership, organisational style and relationships. Fr…