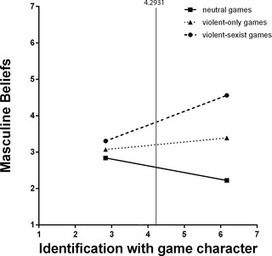 Empathy—putting oneself in another’s shoes—has been described as the “social glue” that holds society together. This study investigates how exposure to sexist video games can decrease empathy for female violence victims.

Participants (N = 154) were randomly assigned to play a violent-sexist game, a violent-only game, or a non-violent game. After gameplay, measures of identification with the game character, traditional masculine beliefs, and empathy for female violence victims were assessed. We found that participants’ gender and their identification with the violent male video game character moderated the effects of the exposure to sexist-violent video games on masculine beliefs.

Our results supported the prediction that playing violent-sexist video games increases masculine beliefs, which occurred for male (but not female) participants who were highly identified with the game character. Masculine beliefs, in turn, negatively predicted empathic feelings for female violence victims. Overall, our study shows who is most affected by the exposure to sexist-violent video games, and why the effects occur.

Individuals who are homozygous for the G allele of the rs53576 SNP of the oxytocin receptor (OXTR) gene tend to be more prosocial than carriers of the A allele. However, little is known about how these differences manifest behaviorally and whether they…

Perhaps one of the most defining features of humanity is our capacity for empathy — the ability to put ourselves in others’ shoes. A new University of Virginia study strongly suggests that we are hardwired to empathize because we closely associa…

This booklet addresses the issue of empathy in the care environment, for paid carers or volunteers. Empathy allows you to have a better understanding of the person you are caring for. This booklet covers four practical ways to get you thinking alo…