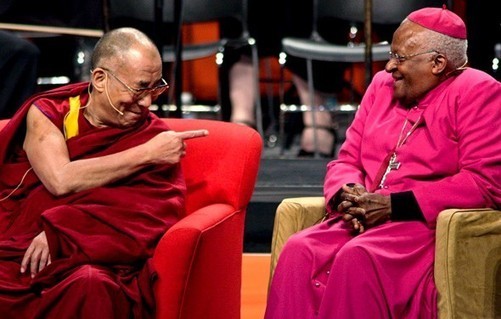 We can be healthier, live longer, and make the world a better place by exploring our potential for compassionate behavior, according to neurosurgeon James Doty,founder and director of the Center for Compassion and Altruism Research and Education, part of the Stanford Institute for Neuro-Innovation and Translational Neurosciences.

Where does your strong interest in compassion, altruism and empathy come from?
Having grown up in poverty with a father who was an alcoholic and a mother who was an invalid, I was exposed to suffering—lack of shelter, lack of food. Sometimes you would see people in positions of power or wealth who could intervene to help, and either would be silent observers or would turn away. And then you would see other people who would immediately reach out. Why is it that there are some who are immediately engaged, and others who turn away as soon as they see suffering because they don’t want any proximity to it? That paradox stuck with me.

So much so that you founded the Center for Compassion and Altruism Research and Education at Stanford University?
Yes. Later in life, when I got into a position in which I could more seriously think about this, I began conversations with my colleagues at Stanford which led to preliminary research efforts. I also wanted the Dalai Lama to come to Stanford to speak because I thought his message on the importance of compassion was compelling. He did come, and it led to individuals donating significant sums, and it began a research effort, which continues.

What is the goal of the center?
Its mission is to understand the neuroscience of compassion and altruism on a deep level, and the impact of these behaviors on health and longevity. One goal is how to maximize an individual’s potential in these areas.

Why is that worth exploring?
We know that as a species we flourish and thrive when we care for others. Not only do you feel happier, but you live better, you feel better, you live longer. And it’s a self-supporting activity in the sense that when you do those activities and they make you feel good, it makes you want to continue. It’s a boon to humanity, but also to one’s self.

Might some people still think you are simply saying “it’s nice to be good”?
If we can show that you have the potential to increase your capacity for kindness and caring, and that this should result in dramatic improvements in your personal relationships, significant decrease in inflammation, improvement in cardiac function,increase in your telomere length (the DNA that protects the ends of your chromosomes), which increases longevity. … If we can show you this proposition, then I think it is different to that.

Some people react with compassion when seeing another’s suffering, and some don’t. Is this divide a result of nature versus nurture?
It’s an open question, but most likely a mix. You can fall back on the happiness literature and say the nature/nurture split is 50–50. We know that genes have a significant impact on behavior. For example, with a female rodent who typically would be protective of her young, if we manipulate a particular gene by turning it off, then she abandons them. We also know that variations in gene receptors for oxytocin can result in individuals being less altruistic. I suspect that, like happiness, we will find a similar split between how one’s DNA and environment affects their ability to be kind and caring.

Can we all become more compassionate?
There’s a small subset of people on the side of extraordinarily kind, compassionate, and that’s their baseline—Desmond Tutu, the Dalai Lama. And then there’s a fairly small group who, no matter what we do to try to potentiate their capacity for compassion, don’t have that capacity. Between those extremes are the rest of us, who can probably benefit from some kind of intervention or training when it comes to our ability to be altruistic or compassionate.

So how does CCARE try to intervene?

It has a program of compassion-cultivation training courses that includes both meditation and group-focused activities. There are also other institutions in the United States and internationally that have intervention or training programs of which a large component focuses on increasing compassion.

What effect are these measures having?
There’s preliminary data that people who take our eight-week course show greater compassion. We also did some work with Stanford psychologist Jeanne Tsai in which individuals went through our training and then we studied how they responded to a scenario of writing to someone in prison for murder. Some think being compassionate means you give others a free pass regarding responsibility. But what was found was that no one gave this presumed murderer a free pass. They held them to be responsible but also encouraged them that they did have a future.

Could what is being learned about altruism help us tackle challenges such as war and injustice?
Research has shown that there is a tendency, based on evolutionary aspects, for us to define a tribe or an anchor, an in-group and out-group. Ultimately this doesn’t work for the greater good. To overcome these natural mechanisms, certain techniques help: simply looking at that other group, whose members you would not normally feel kinship with, and saying, “Well, it turns out that they want their children to be educated like mine. They have the same interest in seeing X, Y or Z occur, just like me.” It has a profound effect on how you perceive your responsibility to others. It gives you the realization of our shared humanity and interdependence. It changes how you interact.

The Dalai Lama donated to CCARE. Can a body funded by a religious leader do good science?
The Dalai Lama has had an interest in the neuroscience of meditation for more than 30 years, and which is more recently focused on compassion. But there is not one shred of evidence that there was ever any agenda related to the promotion of Buddhism. He has very specifically separated empirical science from religious dogma in his talks.

Where does the work of CCARE go from here?
I would like to create a virtual compassion gym, where individuals get a psychological profile which takes into account what resonates with them, be it spirituality or religiosity, or other types of philosophies. Additionally, we would incorporate what we have learned from online gaming and psychology on engagement. Based on that, we would create a plan so they can strengthen their compassion muscle and then show how they benefit, both mentally and physiologically. If we’ve done our work correctly, the results will be strong motivators for them to continue, hopefully making their lives and society better.

How hopeful are you that the world can become a more compassionate place?
I think that we’re really seeing a sea change in how people perceive their place in the world. The millennium generation is the first to grow up with 24/7 access to global information. When you see the suffering of others, you realize that those individuals could just as easily have been you. It’s much easier to say, “I can’t let that happen—I feel their pain.” That is how humanity is going to survive.

One of America’s most under-appreciated talents is the sheer genius of its married and unmarried couples in using the language and insights of therapy to destroy their relationships. Decades ago, when psychoanalysis was all the rage, husbands and…

AS PROTESTS against financial power sweep the world this week, science may have confirmed the protesters’ worst fears. An analysis of the relationships between 43,000 transnational corporations has identified a relatively small group of companies, main…

TED Talks Nature’s beauty can be easily missed — but not through Louie Schwartzberg’s lens.Jim Manske’s insight:Stunning visuals and an inspitring message!See it on Scoop.it, via Radical Compassion

Adults who were hit or smacked as children face higher odds of mood and anxiety disorders and problems with alcohol and drug abuse, say experts from the University of Manitoba in Canada….See it on Scoop.it, via Radical Compassion