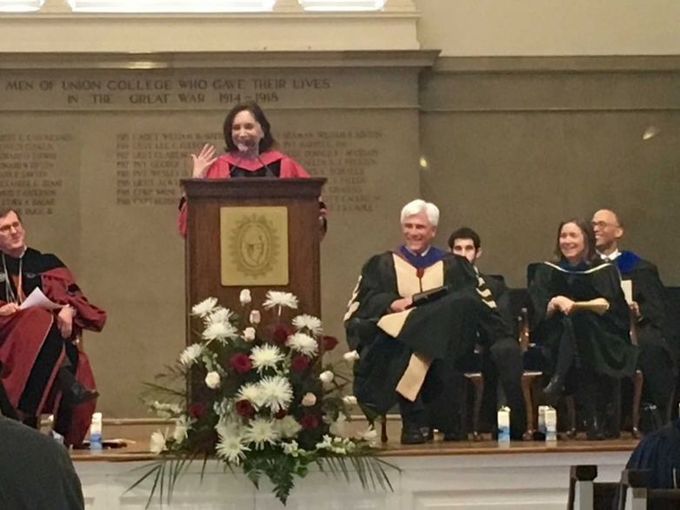 Empathy is being lost as people’s habits shift, author says Society has reached a turning point in how humans interact with technology,

Sherry Turkle, the author of “Reclaiming Conversation,” said to Union College students, faculty and administrators on Thursday. While many people find ways around face-to-face conversations, they often do not like how this makes them feel, she said, noting while 89 percent of Americans say they took out a phone during their last social interaction, 82 percent said the action diminished the conversation.

Turkle said in the last several decades, there has been a 40 percent decline in empathy, measured across many fields of study, in college students. The majority of that change has occurred in the last 10 years, she said.

Kids, facing five days without electronics, relearn their ability to connect with one another, she said, calling face-to-face conversation “the most humanizing thing we do.” Conversation nurtures empathy and intimacy, she said.

At the same time, former Secretary of State Hillary Clinton has been caught on tape saying that “smart power” means understanding, and even empathizing with those who wish to murder us.Smart power means “showing respect, even for one&…

When we voted for President Obama, what were we motivated by?   Yet again, this was a function of the Republican Party’s failure to be empathic. They could not imagine why those at the margins — women, people of color, gays and lesbians, young p…

The parents of two children abused by a Catholic priest have told a Victorian inquiry that Australia’s most senior Catholic of showing a sociopathic lack of empathy for their plight..   Anthony and Chrissie Foster had two daughters who were abused…

At its best, empathy makes us grasp that another person – every other person indeed – is not an object on a landscape but a real subject, a subject of beauty and of infinite value, regardless of who or what he or she may be.It is empathy th…