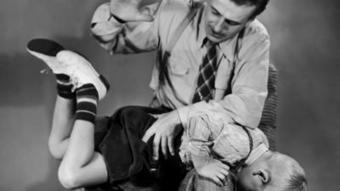 To spank or not to spank: For most American parents, it isn’t a question.

The majority of U.S. children have been spanked at some time in their life, despite a robust body of evidence that suggests spanking a child leads to problems in the future.

The latest evidence of the negative effects of spanking comes from researchers at Columbia University. After analyzing data from more than 1,500 families, they found that children who are spanked in early childhood are not only more likely to be aggressive as older children, they are also more likely to do worse on vocabulary tests than their peers who had not been spanked.

The study was published this week in the journal Pediatrics.

While several studies have found a connection between spanking and aggressive behavior, the finding that spanking could be linked to cognitive ability is somewhat new.

“Only a few studies have looked at the cognitive effects of spanking,” said Michael MacKenzie, an associate professor at Columbia University and lead author of the study. “We are still trying to learn if spanking has a direct effect on early brain development, or if families that spank more are less likely to read to their kids and use more complex language.”

In this latest study, MacKenzie analyzed data collected from more than 1,500 families as part of the Fragile Families and Child Well-Being Study (FFCW). The study followed children from 20 U.S. cities from birth to age 10. Most of the kids were born between 1998 and 2000.

When these kids turned 9, parents were asked to assess their behavior. The researchers also gave the children a test that measured their vocabulary.

The FFCW study also collected other data that might influence a 9-year old’s behavior and performance on the vocabulary test, including the age of the mother when the child was born, the mother’s self-reported stress levels, her intelligence scores, and her own impulsivity. The researchers also knew whether the child had a low birth weight and what his or her temperament was like during the first year of life, among other things. The researchers factored all of these into their analysis.

“If you were just to compare kids who were spanked and not spanked, the differences may not relate to the spanking, because the families that do spank may look different from non-spanking families in lots of ways,” said MacKenzie.

But even when the researchers controlled for these differences, ” we still saw that spanking is an influencing factor in future behaviors.”

The researchers found a clear connection between spanking at age 5 and the child’s behavior at age 9. Compared to children who were never spanked by their mothers, those who were spanked at least twice a week scored 2.66 points higher on a test of aggression and rule-breaking, while those who were spanked less frequently scored 1.17 points higher, according to the study. To get a sense of how much extra aggression that is, boys tend to score 1 point higher on this test than girls, MacKenzie said.

MacKenzie believes that this research shows a need for public health officials and pediatricians to reexamine how they are talking about spanking.

“Spanking is still the typical experience for most kids,” he said. “We have to start being more thoughtful about how we present this information for parents in a way that they can receive it.”

So many parents have a hard time accepting that spanking is truly bad for kids, probably because they were spanked as children and think they turned out OK.

“The decision to spank is tied to most parents’ own rearing experiences,” said MacKenzie. “It is intimately tied to family history.”

Jim Manske’s insight:
I will be eternally grateful for my parents who broke the chain of parental violence.

My father never spanked me. Ever.

I recall one startling pat on the butt once from Mom, and she doesn’t remember it. I like the idea of giving her the benefit of the doubt!

We refrained from spanking our kids. I like the way they turned out. 😉

For a little insight into my son, Jiva’s current project check out:
http://amnestygameofdrones.tumblr.com/

Walter Wink, 76, one of the most creative and influential scholars of our day, died peacefully at his home in Sandisfield in the Berkshire Mountains of Massachusetts on May 10, 2012.   Wink’s breakthrough insights about the contemporary mea…

There is growing interest in the use of meditation and other contemplative practices to promote mental and physical health.   A recent study published in the Journal of Emotions (2012) examined the emotional changes that can result from meditatio…

Rather than letting more days rush by why not practice three ways to become more deeply connected in each encounter?1. Showing Competence Can Cut Us Off From OthersIronically, the more successful we are in proving our competence, the greater the distan…

Did you think once you got married, it would be smooth sailing and now it’s anything but?   Each one of us has two sets of lenses with which to view the world. When you choose the critical lenses, you will see all the things that are wrong with y…