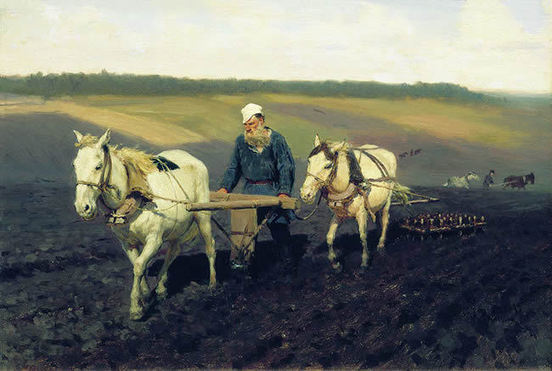 Tolstoy was one of the great empathic adventurers of the 19th century, displaying an unusual desire to step into the shoes of people whose lives were vastly different from his own. Following the Emancipation of the Serfs in 1861, and influenced by a growing movement across Russia which extolled the virtues of the peasantry, Tolstoy not only adopted traditional peasant dress, but worked alongside the laborers on his estate, ploughing the fields and repairing their homes with his own hands. For a blue-blooded count, such actions were nothing short of remarkable. Although no doubt tinged with paternalism,

Tolstoy enjoyed the company of peasants and consciously began to shun the literary and aristocratic elite in the cities. He also founded an experimental school for peasant children based on the libertarian and egalitarian ideas of Rousseau and Proudhon, and even taught there himself. Unlike many of his fellow aristocrats who claimed solidarity with rural laborers, Tolstoy believed you could never understand the reality of their lives unless you had a taste of it yourself.

Empathy, or the ability to identify with others’ feelings, often is considered an important relational skill. Previously, researchers had hypothesized that in order for individuals to be empathetic, they needed to be selfless.However, University of Mis…

QUESTION: My first-grader doesn’t seem empathetic at all.Last night at dinner, he happily mentioned how when he was introducing himself in a group, his thing that others didn’t know about him was that he hated his older brother. His poor br…

Erika Rosenberg offers scientifically- and practically-based training and consultation in a wide range of areas associated with the study and/or understanding of human emotion, facial expressions of emotion, and the improvement of emotional functioning…

For a few minutes on Tuesday, fourth-grader Charlotte Pauline couldn’t hear a thing that classmate Taylor Kelley was trying to tell her.As her frustration grew, though, so too did her understanding of what someone with a hearing impairment experi…