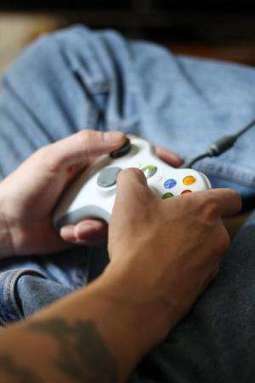 …But males who really identified with their characters in the sexist, violent games didn’t feel as much empathy for the victim,” said Brad Bushman, co-author of the study and professor of communication and psychology at The Ohio State University..

.Results showed that male players who strongly identified with their character in the sexist and violent games showed the least empathy. And that was because they were more likely to agree with what are called “masculine beliefs.”..

As expected, most of the results pertained primarily to the male players; game playing did not have a significant effect on how much empathy the female players had for the female violence victims.

But results showed male players who identified closely with male characters in violent-sexist games were the ones who showed the least empathy.

Reflecting on freedom, identity and morality, this book offers a fresh, sweeping perspective on the human condition and a deep contemplation of the basis for our priorities at this critical moment in our history.What matters, where are we heading, and …

At a time when we feel so much pain and confusion in the midst of this global crisis, many people, myself included, have far too many complex things going through their minds for empathy to occur. Empathy goes beyond sympathy, which is seeing someone&r…

Reflective listening is very simple. So simple that it’s easy to skip it and go directly to addressing the issue. Afterall, when a fight is happening we want it to stop immediately, right? We’re here to get answers and obviously if I addres…

Andy Haner accompanies his wife Layla and eight-month-old daughter Emory to a third grade class once each month as part of Roots of Empathy. The non-profit program teaches children about emotions and feelings through by following the growth and develop…