Home » News » Scientists discover pet dogs yawn when their owners do, as part of emotional connection 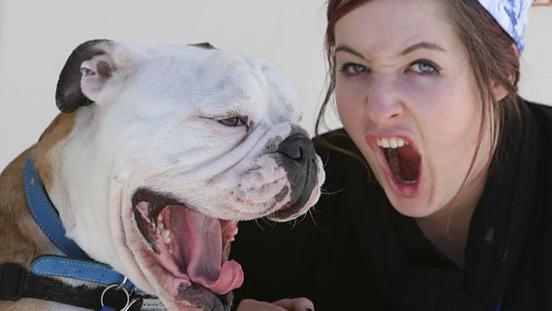 IT’S true. Your dog yawns when you do and the process is contagious, just as it is in humans.

Scientists have found that pet dogs yawn significantly more in response to their owners than to strangers’ yawns.

Dogs also respond less frequently to fake yawns, suggesting they have the ability to yawn contagiously just as humans do.

Previous research has shown that dogs yawn in response to human yawns but it was unclear whether this was a response to stress or empathy.

by Jessica Berlinski  I remember exactly where I was when I learned about the Sandy Hook massacre: in San Francisco, up early, getting coffee in a hotel restaurant. News reports of the 20 children and six adults killed by a former studen…

Technology may make it easier to communicate electronically, but more difficult to do so emotionally. Psychologists who study empathy and compassion are finding that unlike our almost instantaneous responses to physical pain, it takes time for th…

In the biggest study of depression in older people in Australia, researchers at The University of Western Australia and nationally showed that by educating GPs, it was possible to reduce the prevalence of depression, self-harm and suicidal thoughts in …

Empathy in business dealings, especially for the entrepreneur, are vital to maintaining sustainable success. Entrepreneurs are surrounded by people who they need to understand, from shareholders or investors, to employees and customers. When an en…