Home » News » Really? Yawning Is Contagious Between Dogs and Their Owners: yawn is thought to signal empathy. 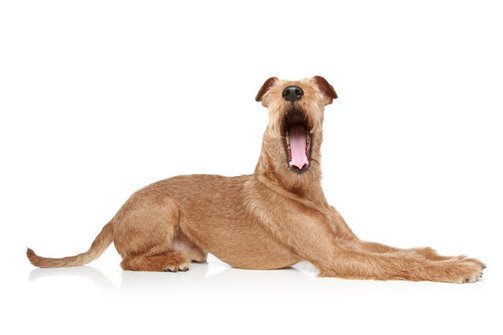 Yawning when you see someone else yawn is thought to signal empathy. About half of all people do it contagiously. Now researchers have confirmed what many pet owners have long suspected: Dogs, too, are contagious yawners.

In a series of experiments carried out on two dozen breeds, from poodles to pit bulls, researchers found that when a dog watched either a stranger or its owner yawn, the dog was far more likely to yawn in response to its owner. Dogs in the study also demonstrated that, for the most part, they could not be duped. They responded frequently to genuine yawns, but less so to fake yawns in which people simply stretched and then opened and closed their mouths without making noise.

Two thoughts: First, Buddhism tends to be the favorite religion of liberalism. No God. No sin. No judgmentalism. Plenty of consequences–karma and all, but I think that gets forgotten. Second, I am not a scientist, but it seems to me that these da…

On the show this week we talk to cognitive scientist Paul Bloom about the morality of babies. Most of us think of babies as selfish, impulsive, and for the most part out of control. We tend to think of their morality as shaped by experience—by so…

Mount alumna Stefanie Shute, BA ’11, is president of an organization with an exceptional mandate – the Empathy Factory.Spreading empathy across Nova Scotia and beyondThe Empathy Factory started as a family operation. When Shute re…