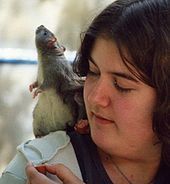 The recent experiment on rats is far from the first time that empathy has been seen in animals in laboratories. In one notoriously cruel experiment, macaque monkeys were given food only if they pulled a chain that electrically shocked another monkey. Nearly all the monkeys preferred to go hungry, and one macaque went without food for 12 days rather than cause pain to another. Monkeys who had previously been shocked were even more reluctant to pull the chain and subject another individual to such punishment. Mice and rats will also starve rather than hurt friends.

At one laboratory where PETA conducted an undercover investigation, video footage shows a small caged monkey tugging on the coat of a worker who was mercilessly beating another monkey. The caged monkey weighed no more than 15 pounds to the worker’s 170, but he wanted to help his friend.

brain intro for empathySee it on Scoop.it, via Empathy and Compassion

Empathetic leadersLike this CEO, there are many (often successful) people in organisations who are direly lacking in empathy. Some executives are quite narcissistic. Self-centered as they are, they may find it difficult to put themselves in other peopl…

Many people would argue that in that regard, the baby starts off with nothing.   The idea is that children start off immoral, monsters or if not monsters, at least they know not from good and evil. This is not the view which I think is supported b…

As usual, the limits of selective empathy, the rush to blame Muslims, and the exploitation of fear all instantly emerge There’s nothing wrong per se with paying more attention to tragedy and violence that happens relatively nearby and in fam…