Home » News » Pupdate: The Debate Over Whether Dogs Can Catch Yawns from Humans Rages On 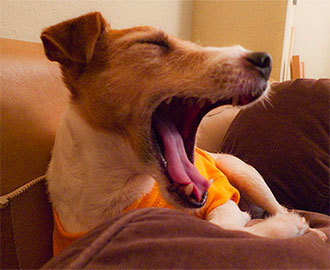 A new study shores up the idea that ‘yawn contagion’ can leap the species barrier, but the science remains unsettled.

Every corner of science has its own set of small, but significant proxy wars. A tiny thing — one measurement, one behavior, one fossil reconstruction — becomes the factor that could prove or disprove a theory that competing scientists may have spent their whole career working on. And sometimes that mini-debate, so crucial to the workings of our research apparatus, takes this form: Can dogs catch yawns from humans?

This may seem silly, but contagious yawning is an oft-studied phenomenon. It’s become an important way to study empathy both because children on the autism spectrum don’t “catch” other people’s yawns and because there appears to be a correlation between people’s scores on empathy tests and their susceptibility to catching yawns. In short: more yawning equals more empathy.

Educators are aware that social problems like poverty, unsafe neighborhoods, violence, and family trauma can affect how students learn when they come to school. Though teaching subjects like math and literacy are the biggest part of their job, in many …

Why is it so hard to feel empathy for strangers? Because we’re stressed by them, says neuroscientist Jeff Mogil. His research suggests one way to reduce that stress: play Rock Band together.See it on Scoop.it, via Empathy and Compassion