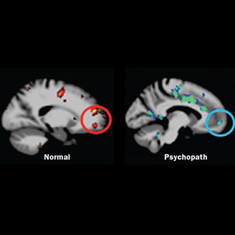 When most of us imagine someone in pain, we feel uncomfortable and want to help. Psychopaths do not: a callousness toward others’ suffering is the central feature of a psychopathic personality. Now an imaging study finds that psychopathic inmates have deficits in a key empathy circuit in the brain, pointing to a potential therapeutic target.

Jean Decety, a psychologist at the University of Chicago, and his colleagues used functional MRI to scan the brains of 121 male prison inmates while they looked at photos of a painful moment, such as a foot stepping on a nail or a finger being smashed in a drawer. The inmates were instructed to imagine the scenario happening to themselves or to another person, a perspective-switching technique that easily elicits empathy in most people.

Standing in the shoes of another, we are invited to see as they see, feel as they feel.   The Freeh Report on Penn State, highlights the “striking lack of empathy” on the part of university officials toward the child victims of rape an…

Empathy in Business: Business Innovation Conversation 2Please join us on Thursday, April 16, from 6:30-8:30pm at Impact HUB Oakland for a conversation on empathy in business. We will bring together entrepreneurs, executives, investors and students…

full posthttp://facebook.com/EmpathyCenter/posts/937212546323408I set up the empathy tent yesterday in downtown Berkeley and hope to set up again tomorrow. http://cultureofempathy.com/OccupyEmpathy/The city will not give a permit so I set up witho…