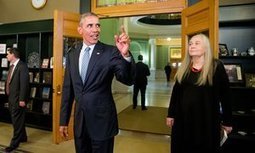 Barack Obama has said that novels taught him “the most important” things he has learned about being a citizen.

“It has to do with empathy,” Obama told Robinson in a conversation which is published in the 19 November issue of the New York Review of Books.

“It has to do with being comfortable with the notion that the world is complicated and full of greys, but there’s still truth there to be found, and that you have to strive for that and work for that. And the notion that it’s possible to connect with some[one] else even though they’re very different from you.

Prosocial media and video games appear to have a positive influence on behavior regardless of culture, according to a new cross-cultural study led by researchers at Iowa State University. Lead author Sara Prot and colleagues surveyed thousands of …

A new study by a group of British psychologists at the University of Cambridge sheds some light on the subject, finding that music listeners usually fall into one of two camps: those who are empathizers, or those who are systemizers.If you li…

Ven. Chodron discusses the difference between empathy and feeling sorry for someone.See it on Scoop.it, via Empathy and Compassion