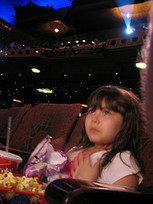 “It’s the movies that have really been running things in American ever since they were invented. They show you what to do, how to do it, when to do it, and how to feel about it.” – Andy Warhol

Even if this fairly dramatic Warhol quote were an overstatement, it still raises the question: To what extent does our understanding of the world and of ourselves stem from what we observe in the movie theaters? Even though research has yet to offer a definitive answer to this question, it is clear that we live in a world in which film is a dominant source of information.

Given the likely impact that movies have on the mind of the average individual living in 21st century America, it seems important to examine and discuss the healthfulness and truthfulness of the ideas behind the larger-than-life images. The MWC (Media Watch Committee) is an organization dedicated to routing the far-reaching effects of cinema down a healthy, adaptive path, so that audience members exiting theaters will be more likely to put down the cigarettes and pick up an enlightened perspective.

WE ALL have our regrets.Jim Manske’s insight:The essence of this story to me demonstrates two key contributions we have as parents: Warmth and Modeling. Warmth, to me simply means expressing the love we have to all people in our actions and words in …

Taking in less of the things you love makes you enjoy them more.Via NYT:In a recent study conducted by our student Jordi Quoidbach, chocolate lovers ate a piece of this confection — and then pledged to abstain from chocolate for one week. A…

The positive effects of trust are manifold. Recent research has shown that trust levels may even influence physical health.   The current work explores this issue and aims to shed light on the mechanisms underlying the relationship between trust a…

Amanda Kendle explains how travel and new experiences can develop your connection – your empathy – with almost anyone… Fortunately, one big bonus of traveling is that exposing yourself to different cultures and experiences can certainly help you dev…