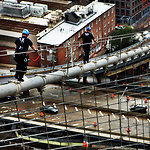 On bridges and rooftops, police officers in the Emergency Service Unit reach out for that one emotional chord that will change a suicidal mind.

ON a concrete ledge off the upper deck of the George Washington Bridge, more than 200 feet above the swift and leaden Hudson River that November night, the two detectives gingerly approached the despondent man as he contemplated jumping.

The plunge, at a speed of more than 60 miles per hour, would surely kill him.

Detectives Marc Nell and Everald Taylor, tethered to the bridge and to their rescue truck with nylon harnesses and heavy rope, knew to resist the urge to pull the man to safety. It was not time yet.

“Tell me your name,” Detective Nell said, tapping into the emotional and psychological arsenal that he had acquired in training. “Talk to me.” “Think of your family.”

Sometimes the detectives do most or all of the talking. It does not always matter. What the detectives are probing for is not necessarily conveyed in words. They are looking for an opening. A moment of doubt.

“Once you see that light, you see their facial expression change, their body posture change, and you think: ‘Oh, I got them. O.K., they are not going anywhere,’ ” Detective Nell said. “It’s like when a boxer gets that shot and he knows that the opponent is wobbly and he just keeps going at that same spot.”

In this case, Detectives Nell and Eddie Torres, a third officer who had joined the rescue, did what they refer to as the Grab. They seized the man, pulling him off the ledge and over a guardrail.

Each year, the Police Department receives hundreds of 911 calls for so-called jumper jobs, or reports of people on bridges and rooftops threatening to jump. So far this year, that number is on track to surpass last year’s total, 519.

The opportunity to help people, affording them a second chance, feels like a privilege, said Detective Dennis Canale, of Emergency Truck 5 on Staten Island.

Empathy is the lifeblood of any system of health—it gives us all a shared stake in being healthy and helping others to thrive as well. Building empathy has been a critical strategy in my household of late—not only because it helps mot…

How many times each day do you try to work yourself up to tackle some undesirable task?    See it on Scoop.it, via Radical Compassion

See on Scoop.it – Restorative Communication Restorative Justice in British Columbia. advocates … Our intention is to create a destination for Escorted […]

In this 7-minute video, psychologist Barbara Fredrickson explains that while it’s not always easy, by adopting a routine to generate positive emotions, you not only increase your happiness levels, but can alter your biological makeup for the bet…