Home » News » PLOS ONE: How Does Fiction Reading Influence Empathy? An Experimental Investigation on the Role of Emotional Transportation 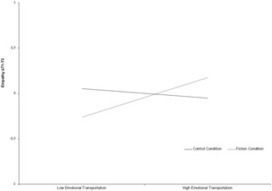 The current study investigated whether fiction experiences change empathy of the reader. Based on transportation theory, it was predicted that when people read fiction, and they are emotionally transported into the story, they become more empathic. Two experiments showed that empathy was influenced over a period of one week for people who read a fictional story, but only when they were emotionally transported into the story. No transportation led to lower empathy in both studies, while study 1 showed that high transportation led to higher empathy among fiction readers. These effects were not found for people in the control condition where people read non-fiction. The study showed that fiction influences empathy of the reader, but only under the condition of low or high emotional transportation into the story.

Extremism can be withered, shrunk and eventually annihilated through citizen-centric and citizen-powered empathy strategies.Governments cannot fight religious radicalization. They can, however, make enabling policies and environments for citizens to ta…

Empathy is an important concept that many leaders do not fully understand the significance of. In this episode, Jesse discusses why empathy is important in learning to lead and engage people, and he explains key skills to hone your sense of empath…

Do you know someone who is too manipulative and full of himself? Does someone you know charm the masses yet lack the ability to deeply connect with those around her?   They possess charm, glibness, and a lack of empathy that allow them to live the…

What appears to be a gender empathy gap, may not be based on the lacking of any actual empathy, but instead fearful males defending their fragile male ego by denying the male sex is capable of being victimized by the “weaker sex”.RazorBlade…