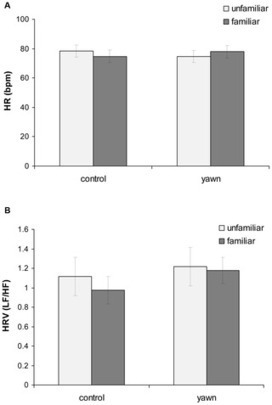 In humans, the susceptibility to yawn contagion has been theoretically and empirically related to our capacity for empathy. Because of its relevance to evolutionary biology, this phenomenon has been the focus of recent investigations in non-human species. In line with the empathic hypothesis, contagious yawning has been shown to correlate with the level of social attachment in several primate species. Domestic dogs (Canis familiaris) have also shown the ability to yawn contagiously. To date, however, the social modulation of dog contagious yawning has received contradictory support and alternative explanations (i.e., yawn as a mild distress response) could explain positive evidence. The present study aims to replicate contagious yawning in dogs and to discriminate between the two possible mediating mechanisms (i.e., empathic vs. distress related response). Twenty-five dogs observed familiar (dog’s owner) and unfamiliar human models (experimenter) acting out a yawn or control mouth movements. Teresa Romero  Akitsugu Konno,Toshikazu Hasegawa

“And by empathy here, I don’t mean merely the ability to feel for the family of this murdered child. I’m guessing most all can manage that much. Rather, I refer to the kind of empathy too rarely attainable, by whites in particular, in the c…

“The importance of social bond in shaping yawn contagion demonstrates that empathy plays a leading role in the modulation of this phenomenon,”   Contagious yawning is also seen in monkeys and great apes. Indeed, this new study replicates similar f…

Building Green Futures promotes a human-centered and a relations-bound architecture, where each building has the potential of recreating and reinforcing the intimate relationship (the “creative empathy”) between places and their inhabitants…

Empathizing with Gaza does not make me anti-Semitic, nor pro-Hamas or anti-Israel. It makes me human.That expression went ‘viral,’ principally because it resonated so forcefully among those who, horrified by what was happening in Gaza, didn…