Home » News » Pay It Back and Pay It Forward~Glen Geher, Ph.D. 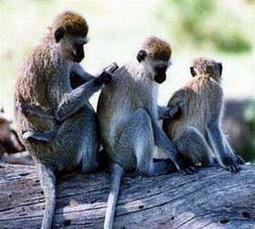 One of the single greatest advances in the evolutionary behavioral sciences in the past several decades can be described as the intellectual bursting of the “selfishness” dam. In 1976, renowned biologist, thinker, and writer, Richard Dawkins published The Selfish Gene (by Oxford University Press). This book is, essentially, a highly accessible and powerful summary of Darwin’s ideas on evolution — applied largely (but not fully) to several classes of animal behavior (such as the mating habits of the praying mantis, the murderous nature of emperor penguins, and the helpful nature of vampire bats). This book is truly awesome and you should put it near the top of your list if you have any interest in the world around you and haven’t yet read this significant work.

One intellectual consequence of Dawkins’ provocative title was a focus on the many connotations of the term selfish. Dawkins meant this term in a very specific sense, literally meaning that a “selfish gene” is a gene that codes for qualities of an organism that increase the likelihood of survival and/or reproductive success. In short, replicating genes out-exist non-replicating (or poorly replicating) genes in the future of a species. This is really all he meant. But folks who followed his work elaborated. It made sense to many to think of an animal such as a human, then, as a primarily selfish being. After all, the reasoning goes, if genes that exist are selfish, then products of genes, such as humans, must be too. And this fallacious reasoning drove much in the way of (a) how evolutionary science has progressed since the publication of The Selfish Gene and (b) how evolution (now seen by many as espousing a “red in tooth and claw” take on our kind), has taken on something of a cold angle on what it means to be any kind of organism, including a human.

There is good news and bad news that follow up on The Selfish Gene. The bad news is that this misinterpretation (or overly applied extension) of Darwin’s metaphor has not helped work in the evolutionary sciences with PR issues. People from the outside looking in often think, “Oh, that evolution stuff, isn’t that the stuff that says we are animals and that we all want to kill each other for our own selfish gain?” Not so pleasant a portrait. I can see why someone might not like that!

The good news follows: An amazing thing about this field in the past several decades has been the landslide of research that sheds light on the positives of human nature from an evolutionary perspective (SeeGeher, 2014). We can almost think of this as the dawn of a potential field we could call Positive Evolutionary Psychology (yup, PEP!). Here are just a few directions that the science in evolutionary psychology has taken which paints humans as loving, helpful, and self-sacrificing:

1. Paying It Back: Or giving back to others who have given to you in some important way, is hugely significant from the perspective of evolutionary psychology. Trivers’ (1971) landmark work on the topic of reciprocal altruism demonstrated in relatively long-lived species such as our own, the tendency for altruism among-non kin may evolve, such as people helping others, even strangers. Sometimes this kind of help is “paying it back,” or reciprocating altruistic acts that have come to new altruists in a small-social community. Not paying back altruism is socially dangerous — in your social ecosystem, my social ecosystem, and in the social ecosystems of pre-agrarian humans all around the globe. We’ve evolved to pay it back.

2. Paying It Forward: This is a term that’s been thrown around a lot in recent years, and I love it! It essentially says to give to others — not to reciprocate them for having helped you in the past, but to help them proactively so that they are on good footing moving forward. Maybe they will help you in the future. Maybe they will help others close to you (kin, friends, etc.), in the future. Maybe they will help the broader community in the future. Your helping them proactively sets the stage for any of these outcomes, all of which have potential to positively influence you and your kin and your social network. Paying it forward is seen positively in social communities; it helps people develop reputations as altruists or helpers or, more simply, as folks whom can be relied upon. And, without question, such a reputation is adaptive and leads to be positive outcomes (even if indirectly) for the individual who chooses to pay it forward.

Think of joining a Big Brother, Big Sister program when you’re in your mid-20s (as I did when I was a graduate student in NH). In these kinds of programs, you find a young child (usually around 7 years old) who just needs a little boost, a little help, some older figure to lean on and talk to. For instance, when I lived in NH in the 1990s, I met regularly with 7-year-old Jacob. Great kid, dad not so much in the picture, benefited from having some kind of young adult male role model.

We did what he wanted to do — movies, sledding, mini-golf, swimming, etc. We talked and we’ve stay in touch still. He’s now a graduate of the University of Vermont and is an ace at computers; for him, the sky is the limit. My helping him when he was young was paying it forward; and when I see how well he’s done, I’m pretty darn glad that I put my time in to get to know Jacob.

Human offspring are altricial (helpless), and acquiring help from multiple adults (think monogamous pair of adults) is hugely beneficial to successful development. And when the adults in that pair are fully aligned in their vision of family, which benefits from them being truly in love with one another, parenting will thrive. Love, an inherently selfless act, is a foundational part of the human evolutionary story.

Did Dawkin’s juggernaut of a term, Selfish Gene, imply that all features of all organisms are selfish in the colloquial sense? Absolutely not. He simply meant that qualities of organisms that lead to gene replication are likely, mathematically, to out-exist qualities that do not facilitate such replication. In complex, socially oriented, and long-lived critters like us, it’s very often the case that selfless, other-oriented behaviors (such as paying it back, paying it forward, or loving another in a selfless manner) are exactly the highly evolved things that make us human and these are the qualities we share with humans in all corners of the globe.

To some extent, selfish genes have, in the case of humans, created altruistic apes who focus largely on what they can do to help others and to build strong and positive communities. This sounds a little like positive evolutionary psychology* to me!

“To be beautiful means to be yourself. You don’t need to be accepted by others. You need to accept yourself.” ~Thich Nhat Hanh I was raised in a family where outward appearance and reputation were important. Standing out was only…

If you’re not familar with Dan Simon’s work on attention, check out the two videos…See it on Scoop.it, via Radical Compassion

Michael Gazzaniga was still a graduate student when he helped make one of the most intriguing discoveries of modern neuroscience: that the two hemispheres of the brain not only have different functions, but also operate independently—the so-…