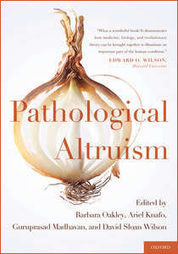 “Empathy,” Oakley notes, “is not a uniformly positive attribute. It is associated with emotional contagion; hindsight bias; motivated reasoning; caring only for those we like or who comprise our in-group (parochial altruism); jumping to conclusions; and inappropriate feelings of guilt in noncooperators who refuse to follow orders to hurt others.” It also can produce bad public policy:

The government used these agencies to promote social goals without acknowledging the risk or cost. When economic conditions faltered, many lost their homes or found themselves with properties worth far less than they originally had paid. Government policy then shifted to the cost of this “altruism” to the public, to pay off the too-big-to-fail banks then holding securitized subprime loans. . . . Altruistic intentions played a critical role in the development and unfolding of the housing bubble in the United States.

As Rizzolatti explains, “The instantaneous understanding of the emotions of others, rendered possible by the emotional mirror neuron system, is a necessary condition for the empathy which lies at the root of most of our more complex inter-in…

Technology may make it easier to communicate electronically, but more difficult to do so emotionally. Psychologists who study empathy and compassion are finding that unlike our almost instantaneous responses to physical pain, it takes time for th…

At the same time, former Secretary of State Hillary Clinton has been caught on tape saying that “smart power” means understanding, and even empathizing with those who wish to murder us.Smart power means “showing respect, even for one&…

The Empathy Way is a collection of books of beautiful stories to help children understand empathy featuring beautiful pictures of bonobo apes.See it on Scoop.it, via Empathy and Compassion