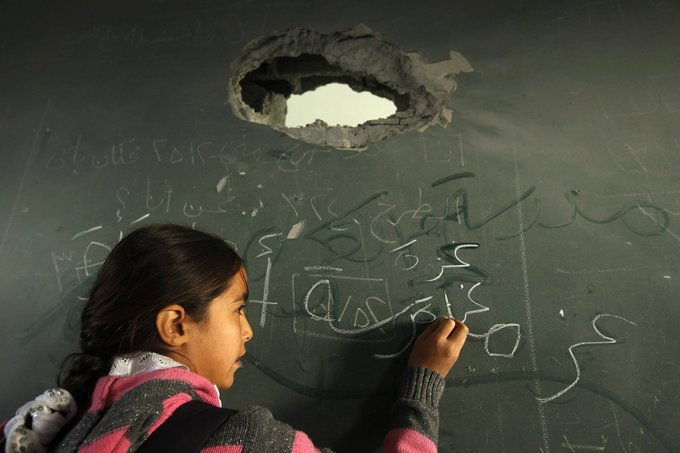 Empathy is not a common trait between Israelis and Palestinians. They have a stake in the same piece of land, and two completely different justifications for it. Even their history books tell different stories. According to a five-year study of Israeli and Palestinian textbooks conducted by the Council of Religious Institutions of the Holy Land, children on both sides of the conflict, starting at about age five, are taught wildly different versions of the same historical events, with each side’s version ignoring the other side almost completely.

“The other is just not there,” says Sami Adwan, a Palestinian who along with an Israeli and an American conducted the three-year study. Each side’s history books, he points out, ignores the religion, culture, economy and daily activities of the other. Israeli history book fail to mention the Palestinian Nakba; Palestinians omit the Holocaust. They are not even represented on each other’s maps.

The Council initiated the study to combat the logjams and stalemates that the region’s competing ideologies so frequently create. Other projects include a young religious leaders program to build mutual acceptance and respect between the two factions. But by far the most interesting thing about the joint Israeli-Palestinian Council is that it is not unique.

‘I never looked at an Israeli as a human, I looked at them as the enemy that needs to be thrown out of my country.’

In the last 10 years, dozens of NGOs have begun popping up in the region; some of them run by Palestinians, some by Israelis and some—like the Council—as partnerships between the two. But all of them are committed to going beyond political processes to improve Israeli-Palestinian relations, whether it’s through institutions such as schools and business enterprises, or even groups composed of ex-military personnel.

Some are small grassroots efforts, such as Hand in Hand, a chain of four Arab-Israeli schools that teach both Arabic and Hebrew.

“This is a bilingual school, but Arabic and Hebrew are not just languages, they are nationalities, religions,” says school Principal Hassan Agbaria. “Both narratives exist here in the school, and we try to show that they can live together each beside the other, and everyone can choose their identity.”

“I’ve spent more time with more Palestinians in the last six months than I have throughout my entire life,” says Initiative board member Moshe Lichtman, the former head of Microsoft in Israel. He says the collaboration is the first of its kind for Israelis and Palestinians.

To fully grasp how these various operations work, it’s necessary to match faces to organizations. Here are two portraits, one Palestinian, one Israeli. They document the very different ways in which two individuals grew to understand the people they’d once considered enemies. More importantly, they illustrate the powerful transformations both made in going from extreme nationalists willing to fight on the front lines for their country, to peace activists working to bridge understanding between Israelis and Palestinians.

Click through for a detail look at two nonviolent heroes.

Sometimes it Doesn’t Pay to be Right“You’re being defensive!” If you’ve ever been on the receiving end of these words, you know that the last thing that you feel like doing upon hearing them is to drop your guar…

These smart ideas for encouraging children to be more empathetic are from Start Empathy, a new education initiative created by the nonprofit Ashoka. The goal is to get kids and adults thinking about the topic—key for raising kids who un…

Chief Justice Zaila McCalla said the judiciary fully embraces the move by government to introduce restorative justice principles within the justice system.   The Ministry of Justice is looking to apply the concept to the local court system and is …