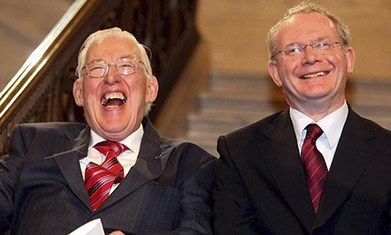 “In a conflict there is suffering of a nature and on a scale that we from the outside can scarcely appreciate, because it is not within our experience. Each side has a sense of pain and of cruel consequence from the other side’s actions. They need to know that those mediating get this feeling, not at a rational but at an empathetic level. In getting it, the mediator is then able to pass something of the pain of each side to the other. Especially where there has been violence over a prolonged period, and in conflict the violence often either falls or is even directed at the innocent, being able to articulate the sense of hurt and know that the other side has been forced at least to confront it, is a powerful way of opening up the dialogue that can lead to peace.”

Sympathy usually means entering into and sharing feelings that another person has verbally and intentionally expressed; empathy involves intuiting something unspoken, of which the other person may sometimes be entirely unaware…   In my view, the…

Empathy is about standing in someone else’s shoes, feeling with his or her heart, seeing with his or her eyes. Not only is empathy hard to outsource and automate, but it makes the world a better place.” —Daniel H. PinkEmpathy may…

Tolerance simply stated, is the absence of physical violence against someone else. But it doesn’t guarantee that laws and edicts won’t be issued that undermine the spirit of coexistence….I along with my colleagues at Harvard; rabbis, priests, pastors…

For a while now I have been pondering how Focusing differs from Mindfulness and for me one of the key factors is the place of an empathic listener when we practice Focusing in pairs. This relationship with a companion or listener changes the whole proc…